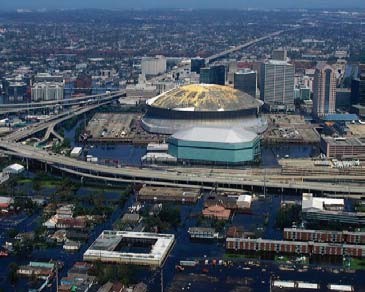 No building came to make us so aware of the human misery caused by Hurricane Katrina and its aftermath than did the Louisiana Superdome. It was so tragic and so unsought. For three decades, the Superdome has been the world’s largest unobstructed steel-built venue.

It had brought joy and pleasure to many. It hosted the world record indoor concert crowd of 87,500 — for the Rolling Stones, naturally. It was the venue where a North Carolina freshman, Michael Jordan, beat Georgetown with a last-second shot in the NCAA finals.

Popes had paid a visit. How heartbreaking then to become a symbol of relief efforts gone badly wrong and a venue for the mind-numbing miseries of thousands. Stadium supreme The Dome dates back to the 1970s when Louisiana opted to build a state-of-the-art athletic and convention facility.

It would be only the second domed stadium ever, and twice as large as its seven year-old predecessor, the Astrodome. The architectural brief was for a free-standing, 45,000 sq m roofed stadium. The design would break new ground. The architects, Curtis & Davis and Associates, opted for a steel frame on a concrete base with a lamella steel roof. Construction started on August 11, 1971, on the site of a former cemetery.

Locals attribute the subsequent poor record of the New Orleans Saints, who call the Superdome home, to this disturbing of the dead. Construction was completed in November 1975, with costs totalling $US134 million. The interior volume of the fi nal building covers 3,500,000 cu m. It has a diameter of 210m and a height of 82.3m. Its floor area of 25,000 sq m makes it the largest domed structure in the world.

The listed maximum football seating capacity is 72,003, with smaller numbers accommodated for basketball, baseball and hockey. Disaster vs design Overall, the Louisiana Superdome has worn well. It looks relatively undated and continues to host sporting and other events with ease.

And it was built to withstand catastrophes. The original roof was engineered designed to withstand 200mph winds, and flood waters were calculated never to be sufficient to reach the second level, 10m from the ground. Prior to Katrina, the Superdome had been used as an emergency shelter, although it was never designed for such a task. It was known to suffer from severe shortcomings in this role. In 1998 it housed 14,000 in the aftermath of Hurricane Georges. On this occasion it had been found difficult to supply people with the necessities, while looting had been rife. Severe logistics problems bedevilled the Katrina refugees.

These were compounded when 145mph winds took out two sections of the roof causing water and debris to pour onto the 20,000-plus people below. Ultimately, some 70% of the roof failed. Roof The roof failure could raise intriguing questions for the construction and legal industries.

The original building employed the then novel sprayed polyurethane foam (SPF) system, applied directly over a metal deck. It provided seamless water protection with good insulation and excellent fire and wind resistance. In 1979 a severe hail storm caused thousands of hairline cracks in the outer coating.

No leaks occurred but roofing consultants argued that the damage had grossly affected the integrity of the roof. The SPF was allowed to deteriorate, and although nothing was done for eight years no leaks occurred. Finally, in 1987, recoating was undertaken.

Polyurethane was again used but covered with a thin layer of a Dupont Hypalon waterproofing — which took 162 days to apply. Aftermath The last of the Superdome victims climbed aboard evacuation buses on Saturday, September 3.

They left behind millions of dollars of damage, a flooded field, overflowing toilets, a sea of garbage up to three metres deep and a wretched stench. Although the roof requires repair, the Superdome remains structurally sound.

There has been talk of razing the entire building but this has been rejected out of hand by the Dome’s manager.