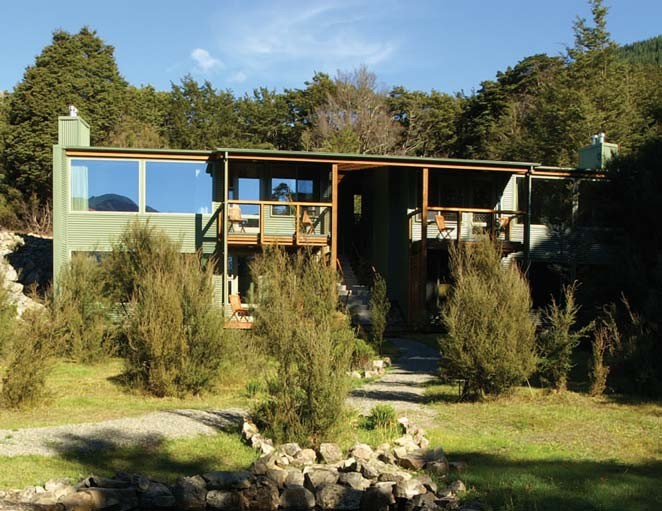 Greymouth builder Chris Yeats became a twotime National Winner at the Registered Master Builders PlaceMakers 2005 Commercial Awards for a challenging building project in a natural environment. His winning property was the Wilderness Lodge Arthur’s Pass, and it garnered praise from the national judging panel.

“This building blends into the landscape so effortlessly, it could almost have grown out of the ground it sits upon,” the judges said. “Chris Yeats Builders Ltd exhibited extreme attention to detail, innovation and organisation in testing circumstances,” according to the team of commercial judges.

“Despite the fact that this was a building site for some months the surrounding landscape remains untouched. This faultless property is a truly magnificent piece of construction.” The Wilderness Lodge Arthur’s Pass was completed by four carpenters and a team of subcontractors who worked well together, Chris says.

“The full credit for the quality of the job has to go to the foreman, Murray Atkinson and his leading hand, Craig Schwitzer. Both are diligent operators who led a fantastic crew that were small in number but extremely capable.” The contract was to construct four new luxury units separate from the existing lodge complex.

It quickly became apparent that this project would require an innovative approach as the site was extremely challenging and had no drive-on access. All materials had to be craned in from a spot above the site, and concrete wall panels, pre-stressed floor units and timber wall framing were fabricated off-site in Greymouth, trucked in over Arthur’s Pass and placed by a 30-tonne crane.

Solid concrete walls lie behind all the timber panelling. These were tailored by a structural engineer to fit the crane being used on the job and were carefully weighted to ensure they could be lifted into place.

They were designed as a series of small panels that would resist cracking during transportation. The weather was unreliable and unseasonable throughout the entire contract period, with several heavy snowfalls and lots of rain slowing progress.

On two occasions the crane brakes froze, forcing the team to wait for them to thaw before resuming work. The wall framing, while kiln dried, needed considerable heating to dry once the building was closed in.

Steps were taken to speed construction and the extra effort paid off as the project was completed on time four months after beginning on site. Chris, a four-time national finalist, had always prepared a speech to take to the national awards dinner in previous years “just in case”, but had never had the chance to use it.

This year he didn’t prepare anything to say on the night. His focus was on enjoying the evening with his team and fellow competitors, and marvelling at the wide range of top quality work on display. However, things unfolded with a bang as the first award at the national event at Auckland’s Sky City Convention Centre — the QBE Insurance Commercial Award under $2 million — went to his entry.

As he walked to the stage to collect his award Chris admits: “I wondered what I was going to say, I was so nervous.” The evening ended with Chris Yeats Builders Ltd being named the 2005 Registered Master Builder of the Year – Commercial. Chris says the whole night was a huge shock. “We had two properties that had received National Gold Reserve Awards and we were all thrilled that one of the properties won. “Our table was buzzing.

The foreman on the winning job is a modest man who is a quiet achiever but I could tell he was elated. The whole team has been on a high ever since.” Getting to know other commercial builders and achieving recognition for his business in an extremely competitive arena are some of the benefits of entering the Registered Master Builders PlaceMakers Commercial Awards, Chris says.

To do well he feels it is vital that you pay attention to every detail and have an excellent level of finishing. As for the future, Chris Yeats Builders Ltd is happy to continue creating beautiful properties for businesses to operate in and for the public to admire.

Chris says seeing happy clients enjoy high quality work brings him real satisfaction, and if he attends another national awards gala he will have his speech safely folded in his pocket.