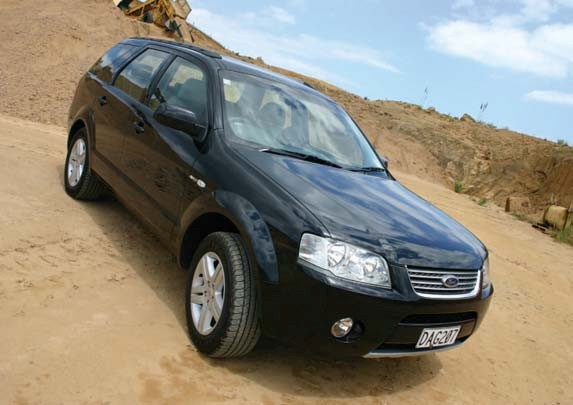 This is our Territory and don’t let anyone around the world tell you any different. Judging from Ford’s phenomenal success with Territory here and in its home country — and, sadly, the land of Big Red rocks is home to the Territory, unlike pavlova, which we had first — it would not surprise this motoring writer to encounter the Territory in other global markets.

We checked out the Ghia — or top-of-the-line — Territory this month and, therefore, we had the best of everything. But we felt it appropriate to identify that there are three other versions of Territory — the TX rear wheel drive, the TX all wheel drive, the TS AWD as well as the Ghia AWD, the model you’re reading about.

This is the SY Territory, launched to coincide with the BF (Better Falcon) launch. Territory owes quite a bit to Falcon, so it stands to reason that when the big bird gains so does the Territory. First up, Territory’s transmission — which was, let’s be fair, not too bad to begin with — has now gone to the ZF factory to have new life and a new cog breathed into it.

So we now get a Territory with a very slick and sexy six-speed auto. The advantages are immediately obvious — greater driveability, better fuel economy potential and much greater fl exibility in rev range. You also, as an added safety feature, gain dynamic stability control for better cornering on the road and hill descent control for when you want to go off road.

Dynamic stability control helps the Territory do away with those nasty understeer/oversteer thingies, basically keeping you and the vehicle on the straight and narrow as much as possible, bringing ABS, traction control and electronic brake force distribution systems into play as required.

Next up is the addition of the eyes in the back of the head. This is an area that most chippies who have to back the Territory will certainly appreciate. The inclusion of a camera, mounted just under the latch and above the licence plate, has given the driver 15 metres of rearward visibility, all of which is communicated to the TFT screen in the cabin.

All very cool. But what about the guts of the thing? Territory has the 4-litre, six-cylinder inline engine with 190kW of power and 383Nm of torque, but the engine has been upgraded to the extent that the SY model increases fuel effi ciency by 2.5%, going from Ford’s 13.5 litre per 100km to 12.8 litre per 100km.

Territory has fold fl at seating with regular seating for fi ve in the rear, which gives you a sizeable cargo space when you’re not trucking people around and, as far as driving long distance goes, the Territory’s comfort levels are hard to match.

Cruise control, dual zone climate air, wheel mounted stereo controls, power adjustable pedals and six-way adjustable driver’s seat means if you can’t get comfy in a Territory, go talk to the Guinness Book of Records — they’ve got pages for people like you.

For the rest of us, a trip to the nearest Ford dealer to check out the SY Territory is a better idea.