Home Latest News Conference had it all! 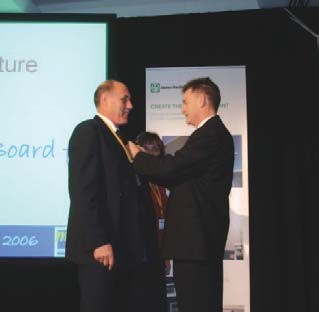 One of the most important announcements in New Zealand construction history, a team of expert speakers imparting essential industry information, a fantastic location for serious and social activities and a record number of delegates, partners and kids — the 2006 RMBF conference had it all!

And that’s not forgetting a generously donated chunk of cash — $20,000 which was raised at the opening night’s Southern Welcome Party at the Skyline Restaurant — for local hospices.

A quick look at the numbers for the 2005 conference in the Bay of Islands and this year’s event in Queenstown bears comparison:

• Sponsors: 45 (2005), 50 including 35 stands (2006). The timely announcement regarding builder licensing was the main news to come out of the conference, but the fact that Minister for Building Issues Clayton Cosgrove chose to unveil this important information at the RMBF’s annual conference confirms the leading status the organisation holds in the New Zealand construction industry.

The Minister then undertook a site visit in one of Queenstown’s booming new residential areas with registered master builder Allister Saville which earned valuable prime time exposure for the RMBF on both One News and TV3 News bulletins that night.

Delegates at the conference would have gleaned a wealth of knowledge on essential topical issues such as sustainable building, business best practice and how to position their business during the country’s slowing economy.

Insurance, legal and safety issues were also highlighted, along with a general overview of upcoming legislation from Department of Building and Housing chief executive Katrina Bach. Mike Fox handed over the presidency to stalwart registered master builder Ashley Hartley from Hawke’s Bay to bring the Wellington man’s tenure to an end before the social highlight of the conference got under way — the Carters Gala Dinner.

The first job for every table was a touch of gingerbread house “decorating and refurbishment” (see separate story) before the entertainment for the night began. It was provided by XSet — a chameleon-like outfit who, worryingly for this party-goer, began their set without guitars.

They soon swung into real action though — first as the Bee Gees! Then Elton John! Then Elvis made an appearance! Then Freddie Mercury popped in! Every time you turned around another rock legend was up on stage! It made for a cracking good night and a highly entertaining evening all round. Confi rmation that these conferences just get better and better came from Simon and Belinda Barber of Wellington.

They attended their first conference in Paihia last year and told Building Today at the time that it certainly wouldn’t be their last. When I spoke to them again this year they both agreed that Queenstown was even better overall — from the excellent speakers to the fact that they knew more delegates second time around and found it rewarding to catch up with friends and acquaintances from last year.

So roll on New Plymouth, where the Taranaki RMBA will be hosting Conference 2007!