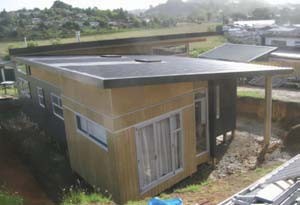 Dimond has been heavily involved in the programme, providing all the roofi ng and associated roofing accessories for both teams’ houses. To further assist both teams, Dimond and H&H Roofi ng combined to help deliver and install the roofing. Both teams opted for modern mono-pitch designs which created a striking and eye-catching appearance.

Dimond Styleline and Dimond Corrugate were the roofi ng profi les specified and used on the two homes. Value and versatility The ever-popular Corrugate provides value and versatility with the added advantage of curving capability, while Styleline can achieve interesting contrasts of light and shade while still remaining economical.

The two profiles were used to excellent effect by both teams with stunning results. But there could be only one winner and, in the end, the Blue Team led by Kylee Wyatt and Brent Old took away the spoils, earning them their dream home mortgagefree. Congratulations to Kylee, Brent and the team on a job well done!

However, it was not all bad news for the Yellow Team, with Mitre 10 coming to the party to help get them to the $240,000 needed to win their auction and purchase their dream home.