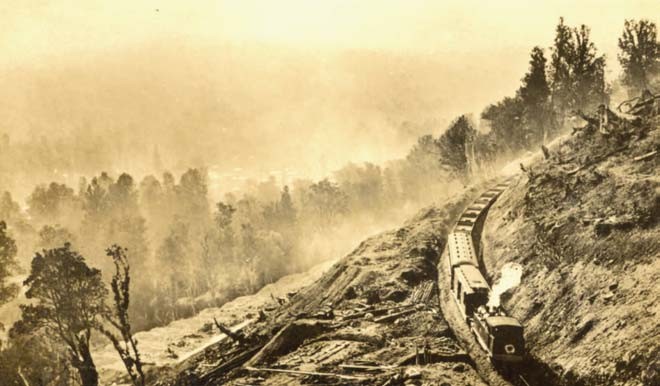 The date: 1898. The problem: How to achieve a workable climb for New Zealand’s main trunk line from Taumarunui to the summit at National Park 2km away but 132m above — a gradient of almost 4°. In the late 1890s the rail head had been driven south from Auckland and had reached Taumarunui.

To the south it was advancing apace up the Rangitikei, climbing past Taihape towards the volcanic plateau at Waiouru. R W Holmes, the field engineer on the spot, was only too well aware that he had a problem. The 1 in 15 gradient south of Raurimu was, and is, beyond the capability of any standard locomotive.

It is just too damn steep. If a rail connection was to be achieved between Auckland and Wellington, then the critical TaumarunuiNational Park section of the main trunk had to be bridged in some manner. In those days the detailed location of the final line was a field engineer’s decision. No resource consent application was necessary. Rail buffs’ delight Holmes’ answer was inspired. It is now history.

It is a delight for rail buffs the world over. They come and travel its 11km, and then go back and do it all over again. Holmes simply lengthened the distance travelled. He wound the line through three horseshoe curves, a couple of tunnels, and one complete spiral.

His cunning plan made skilful use of the topography so as to minimise cut, fill and tunnelling. The upshot was to lengthen the line from 5km to 11km and, thereby, reduce the average gradient to a manageable 1 in 52. The success of Holmes’ solution is shown by the spiral’s continued use today.

A new deviation was pushed through the historically difficult Mangaweka section of the main trunk in the 1980s. New viaducts have replaced their 19th Century predecessors up and down the line. But Holmes’ twisting spiral remains.

A replacement seems most unlikely if, for no other reason, no one has been able to come up with a better idea.