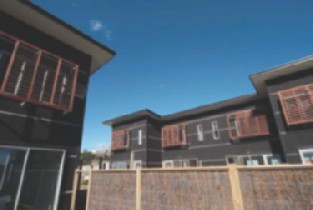 “Stanley’s modular building methodology fi tted the specifi cations. This was an intensive project with a critical deadline, for which modular solutions have proven to be ideal,” he says.

Stanley’s brief was to erect eight single-level and 29 two-level apartments in six months. The team built the 66 modules required for this at its indoor factory in Matamata.

The company engaged three MultiTranz trucks to deliver the units to Napier, 250km down the road. Stanley then craned them into position, ready for Alexander Construction to complete the remainder of the work.

This comprised cladding the exterior in plywood and colour steel, gib stopping and finishing the inside with high-quality fittings, paint and floor coverings.

Alexander Construction also built the foundations. The Ahuriri Quadrant development is situated on an old industrial site in Ahuriri Harbour, a landmark in Napier.

Wellington architect Craig Moller designed The Terraces in close co-operation with the developers. The floor plans of the 37 apartments offered several permutations.

One module measures about 6m by 10m. In a single-level studio this space incorporates an open-plan kitchen, dining and living area, and an ensuite bedroom.

In a two-level apartment this space typically incorporates an open-plan kitchen, dining and living area on the first level and two ensuite bedrooms and a study on the second level.

The two level apartments were erected on top of a breeze-block basement that provides secure parking for two vehicles. According to Mr Roberts, the 30-strong factory team built, on average, one module in six days.

The company had to reschedule some deliveries due to snow on the Taupo-Napier road, while a few days were too windy for the crane to place the modules. “But then, this is New Zealand. In fact, it clearly illustrates some of the benefits of the modular solution.

It is possible to build the product to the highest quality in a controlled environment. This control means that builders face no downtime due to inclement weather.

It translates into considerable time savings on building time,” he says. Mr Roberts believes the modular concept is a smart solution to skills and staff shortages, lower overhead costs and better quality control.

“Stanley has built a strong team and employs and retains some of the best people in the industry. We build in one central location and export to the construction site, where minimum work is required.

This means we are not vulnerable to the local employment situation. “Additionally, we can effectively manage the work from start to fi nish, closely monitoring and controlling time, costs and quality,” he says.

Mr Roberts says the modular method is particularly suited to terrace houses, apartments, hotels and motels. A good example of this is Stanley’s recent project on Mount Ruapehu which won a Gold Reserve Award in the 2006 Registered Master Builders Commercial Awards.

Stanley took 10 months to erect an identical twin to the 70-year-old Chateau Tongariro building. It is the only five-storey building in the country to use a modular construction method. “The original Chateau is renowned for its elegant splendour.

It is situated in a World Heritage National Park and is subject to alpine conditions and vulnerable to earthquakes. “We had to consider waterproofi ng and fi re hazards. All these factors had to be accommodated while the original building had full occupancy during the extension project,” he says.

In the four years the company has been in this market, Mr Roberts has seen a huge increase in demand for modular units.

“Thinking back on the Ahuriri project, the fantastic teamwork of the guys in the factory really stands out. It is this kind of dedication that makes our projects go so well which, in turn, leads to a strong relationship of trust with our clients,” he says. According to Mr Roberts, the size of the module is, at present, the one big constraint for modular building solutions.

“The biggest we have sent to Ahuriri is 7.2m wide by 12m long. But then the Stanley culture is to accept the challenge and fi nd the solution, so who knows?” he says.

Alexander Construction projects manager Robbie Gibson says main contractors rely on subcontractors to be on time and to do it right the first time.

“We also relied on Stanley’s quality control system to ensure that building tolerances were kept within 2mm to 3mm to ensure the erection process was not held up, and that delivery of the units would meet the construction programme.

“Alexander Construction would be more than happy to work with the Stanley team on any future project. Well done Stanley Construction,” he says.