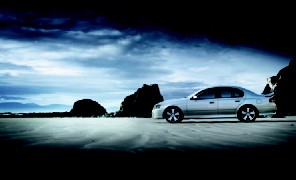 It hardly seems to have been any time at all since the BF Falcon was released, but Ford New Zealand has already taken the wraps off the BF Falcon Mark II.


The Mark II line up is not so much a revolution, but more an evolution, a conscious decision on Ford New Zealand’s part to reposition the more popular vehicles in the Ford stable.


And critical to the enhancement of the Falcon brand is the inclusion of the Falcon XT Sport, exclusive to the New Zealand market.


And while the XT Sport is the new kid on the block within the BF Mark II range, the remainder of the range is far from forgotten.


In fact, with this evolution, the biggest move forward has been to extend the features of the BF Mark I into a wider selection of vehicles.

Perhaps the most impressive of these is the ZF sixspeed automatic transmission with sequential sport shift, which is now available on XT Sport, Fairmont, Fairmont Ghia and all XR-designated sedans.


Dynamic stability control – or DSC – is currently standard on XR6, XR6 Turbo and XR8 sedan models and on Fairmont Ghia. For the BF Mk II upgrade it will be included on the XT Sport, and on the entry level Fairmont as a $2000 option pack.


For those unfamiliar with DSC, the system helps maintain stability through programmed intervention in the braking system and power train, or a combination of both.


DSC works in tandem with ABS – which prevents the wheels from locking when the brakes are applied – and the Traction Control System, which limits wheel spin during acceleration.


Ford continues to present alternative fuel options throughout its model line up and, in terms of Falcon, this means LPG or, as Ford refers to it, E-Gas. Currently, the models available with the E-Gas engine are the Falcon XT sedan and wagon and the XL and XLS Falcon ute – at BF MkII, Fairmont drivers will also be able to choose the E-Gas engine.


BF Falcon MkII models powered by the E-Gas engine have gained a 5% improvement in fuel consumption, with the official ADR figure dropping 0.8 litres per 100km to 15.1 litres per 100km.


And on the subject of fuel consumption, the BF Mk II has seen some improvements through refi nement of the drive-train.


Falcon’s basic shape has been retained with minor interior and exterior improvements.

New colours are key elements of the new models. Neo (blue), Octane (orange) and Breeze (turquoise) is available for XR models only, and a new Chromaflair colour for Fairmont Ghia and the XR range, while another two colours – Seduce and Ego – were released in the lead-up to the new model.

Pricing shows significant reductions across the board on a more competitively-focused Falcon line up.