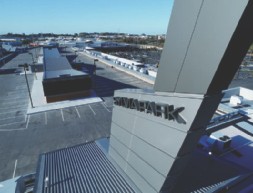 Up until recently identified by its rows upon rows of military sheds, the Sylvia Park precinct in Mt Wellington has played host to early Maori settlers and European farmers.

But it actually started its developed life as a stud farm in the middle of the 19th Century, becoming a breeding ground for several successful Melbourne Cup gallopers.

However, after being used in World War II as a US military storage site, it sat largely unused. That is until Kiwi Income Property Trust (KIPT) recognised the potential of the 24 hectare site and purchased the land in the mid-to-late 1990s. After much planning, collaboration and consultation the concept of Sylvia Park was born.

It is a much quoted statistic that 50% of Auckland’s population live within 20 minutes’ drive of Sylvia Park which lends itself nicely to perhaps the most common of all retail quotes – “location, location, location”.

Sylvia Park has this in spades, providing much of the reasoning behind KIPT developing one of Australasia’s largest retail, entertainment and business centres.

With Auckland City Council looking for investment of approximately $2 billion into growing the surrounding “Tamaki Edge” area, the complex is well positioned to take full advantage of this growth.

Currently being built in stages, the completed Sylvia Park will feature more than 180 specialty retail stores, major flagship stores in The Warehouse, Foodtown and PaknSave, a Hoyts cinema complex, 3000 car parks and bus and train stations.

A business centre is also proposed as the fifth and final stage of the development.

The architecture of Sylvia Park was shared between three parties, with US architects Gensler initially employed to create the overall master plan before Australian-based NH Architecture and Auckland firm Jasmax took over and combined their respective retail skills and local knowledge.

The vision for Sylvia Park was “to meet the emotional and physical aspirations of residents and visitors to New Zealand through offering an exceptional and innovative retail, entertainment and working environment in the heart of Auckland”.

Much of the building design draws inspiration from its surrounding environs, with cone structures on the roof of The Warehouse and the central cone in the entertainment and leisure precinct paying homage to the volcanic cones of the Auckland region.

Sections of angled roofing covering the southern precinct have been designed to evoke memories of the army sheds that previously inhabited the Sylvia Park site, and feature Dimond’s Brownbuilt 900 profile.

On other selected sections of the Brownbuilt 900 Reverse Run wall cladding, Habitats metallic colours have been used to accentuate what could otherwise be very large expanses of uninteresting wall space.

Kiwi Roofing was responsible for the installation of all the profiled metal roofing and cladding throughout Sylvia Park which required significant skill due to the number of roof penetrations (over 200 roof top air conditioning units) and the specific wall cladding requirements.

The scale of the project also required highly efficient project management and cooperation between Dimond and Kiwi Roofing to ensure product was produced and installed to the time lines required by KIPT and Multiplex Constructions, the main contractor.

The walkway canopies that run along the western side of the building are another feature of Sylvia Park’s unique exterior design.

Horizontal timber battens and Durolite Heatguard natural lighting sheets combine to form a solar shading system that mitigates the heat and the impact of the setting sun.

Durolite Heatguard is a new natural lighting product which blocks heat and harmful UV rays whilst still allowing the transmission of natural light. This provides further comfort for shoppers moving between the different areas of Sylvia Park.

Landscaping and urban design has also been a focus for KIPT, with 22% of the site devoted to landscaped spaces such as water features, grass areas, trees and nice paving.

Thirteen hundred trees – 50% of which are natives – were grown off-site for two years, and the entertainment/leisure precinct includes a park roughly equivalent in size to Newmarket’s Lumsden Green.

Consideration has also been given to how Sylvia Park integrates into the surrounding residential area in terms of transportation, community facilities and other public amenities.

Indeed, Alan McKinnon, project director for Sylvia Park, confirms that “urban design has been at the forefront of all our planning for the past three years.”

With Stage 1 and 2 completed and 100% leased, and 91% of the total leases available already taken, Sylvia Park looks to be on a path towards success.

Stage 3 and 4 are due to be completed in mid-2007, and all indications are that KIPT has gone a long way towards transforming those old army sheds into a town centre of which Auckland can be proud.