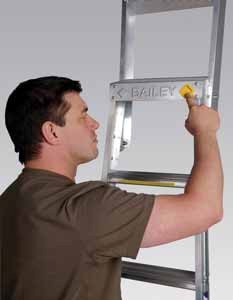 Falls from heights account for a high percentage of construction industry injuries, which is why leading ladder manufacturer Bailey, a Hills Industries company, takes extra care to ensure its products are strong, stable and safe.

In fact, product manager Chris Mayo says when the company surveys ladder users these attributes consistently rank highly when they describe their experience with Bailey ladders. “There’s a reason why we’re the biggest ladder manufacturer in Australasia and the market leader,” he says.

Mr Mayo acknowledges that ladders have the potential to cause accidents, but adds if the end user uses the right ladder for the job and follows safety and maintenance instructions, which Bailey includes with each purchase, it is possible to minimise this risk.  Use the ladder wisely

“Research shows falls from ladders are most commonly the result of slipping, overreaching and using the wrong ladder for the job. “Also, some products can be confusing to end users. For example, a 100kg load rated domestic ladder can be used only at home. An industrial rated ladder must be used on a work site — it’s stronger and designed for more frequent use than a domestic ladder.

“Many accidents involving workers and domestic-rated ladders have been recorded. Ladder users must make sure they choose the right ladder for the job. “It’s also important to choose the right type of ladder. Hills Industries ladders are manufactured from timber, aluminium and fibreglass, each with its own competitive advantages. “But a worker planning to work on electric cables, for instance, should choose a non-conductive ladder for added safety,” he explains. Safety first

The company also focuses on safety messages in its advertising campaigns and runs several safety awareness campaigns each year. Product header cards in retail stores provide end users with important ladder facts to assist them in the selection process.

Hills Industries is the only ISO9001 accredited ladder manufacturer in Australia, and all its ladders are made to AS/NZS1892.1-3 specifications. Bailey stepladders are well known for their Punchlock trademark. “This manufacturing method of connecting the rung to the stile provides additional torsional rigidity, and is up to 70% stronger than traditionally pop-riveted stepladders,” Mr Mayo says.

All designs are rigorously tested by the company’s state-of-the-art, in-house testing facility where products are subjected to thousands of testing cycles, including opening and closing, dynamic drop and vibration tests.

The latter is done through transporting the ladders on the back of a truck over Australia’s most infamous outback roads. Users are getting the message

Mr Mayo says a shift in ladder responsibility is becoming as evident in New Zealand as in Australia. In 2003, the Victorian Government introduced new Working at Heights legislation. This included a three-step risk management process compulsory for accessing a work site higher than two metres.

“The legislation was the catalyst for significant change in the social and corporate responsibilities of people working at heights. Workers are now well informed and empowered to look out for their own safety,” he says.

Reputable New Zealand building product retailers also increasingly stock only high quality industrial ladders. “In the six years we have focused on the Kiwi market, we have gained a significant market share and become a major player.” Looking ahead

In 2002 Bailey introduced a range of platform stepladders with a 900mm handrail 12 months ahead of legislation changes. “Today, we have seen the market follow suit,” Mr Mayo says. In October 2006, Bailey launched a world-first ladder innovation. The Comet Plus is a dual-purpose product that converts from a straight ladder to a stepladder with the push of a button that activates a unique locking device.

Workers planning to access a work site higher than two metres with a ladder should pause a while to carry out a three-step risk management process. The steps are: • Identify the hazard. For example, is the ladder stile positioned over an uneven surface, such as a muddy, water-filled hole in the soil? • Assess the risk arising from the hazard. The ladder could move or unbalance and cause the worker to fall. • Implement control measures to eliminate or reduce the risk. Take time out to fill in the hole and test the ladder for stability, or move the ladder to a location with an even, stable surface.