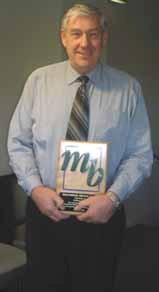 The RMBF’s Meritorious Service Award sets out to recognise the significant contributions made by members to the RMBF and the construction industry as a whole. Announced at the 2007 RMBF conference, the inaugural recipient is past national president Arthur Grant of Otago.

Unfortunately, Arthur wasn’t able to attend the conference and was therefore presented the award at the Volume Builder and Major Contractor Forum in Christchurch in May. Arthur has also recently, and very deservedly, been presented with a life membership of the Otago Master Builders Association.

He was president of the Otago Master Builders Association from August 1991 until March 1994, and was on the OMBA committee until November 1997.

In August 2004, as a nominee of the RMBF, Arthur joined BRANZ and in September 2004 was elected to its board. BRANZ then appointed him as an independent director in September 2006. “I was very surprised and humbled to receive such an Award, especially as it has been voted on by my peers,” he says. “Whilst this Award is truly appreciated I have always considered it a privilege and reward in itself to serve such an esteemed organisation as the RMBF that has for more than 100 years provided substantial benefits not only for its members but, just as important, for the building industry as a whole.”

He also states that the opportunity to meet and mingle with countless wonderful people and develop many enduring friendships is the most rewarding aspect of his work with the RMBF. “I have received far more from my association with the RMBF than I have contributed both personally and business wise.”

The RMBF Board will continue to use the Meritorious Service Award to recognise valuable contributions to the organisation and to the industry as a whole.