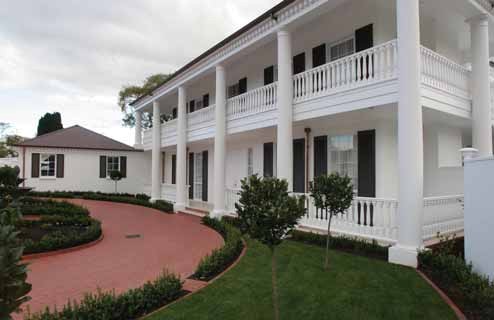 Having taken out the same national title in 2003, Nigel and Jackie this time set out to capture their dream of a grand home with impressive road appeal.

Inspired by grand homes of the southern states in America, and well suited to the history of grand old homes in Mt Eden, this double-storey, white-washed brick home features a copper shingle roof and substantial wrap-around verandas with timber balustrading.

An impressive circular driveway leads to oversized double front entry doors and into a grand entry, which features an elegant chandelier above a sweeping staircase.

The central staircase leads to the stunning Wenge timber library and three bedrooms on the first floor. On the ground floor, formal rooms comprise the western side of the property, flowing through to the large family room and well-designed tiled kitchen featuring a traditional butler’s pantry for discreet food preparation.

A corridor down the eastern side of the house connects to a study, fourth bedroom, gymnasium, sauna and a bathroom.

The master bedroom lies in the south-west corner of the property. It has a large walk-in wardrobe and an elegant tiled ensuite with two magnificent wash basins set on a stone bench top.
The inset bath fills from a single free standing spout, while the shower enclosure is finished with mosaic tiles and has two shower units.

Jackie appreciates the distinctive style of their house.

“The majority of homes are becoming more minimalist and contemporary, whereas we have swung completely in the other direction, back to a classic, traditional style with traditional materials,” she says.

“We have had many people stopping to comment, and the house has created a huge amount of interest in our neighbourhood.”

Nigel’s attention to detail was instilled at an early age, and is a key attribute of NM and JN Benton Ltd and the building projects it undertakes.

“I was told as an apprentice that if you wouldn’t accept it in your own home, do it again,” he says.

A lift provides access to the first floor library from behind the grand staircase and also, very importantly, descends to a wine cellar otherwise entered only through a floor hatch and down a timber wall ladder.

Building in this central Auckland suburb was a challenge, and digging out a wine cellar and swimming pool was a massive exercise given the volcanic rock on the site.

An important landscaping aspect included designing the house around mature native trees which add to the charm of the property, while a fountain, pool and outdoor fireplace maximise exterior appeal.

Nigel says they entered the House of the Year competition “to help with our company profile — and to win”, while Jackie says it’s good to have their building skills judged against other top New Zealand builders.

Competition judges were impressed by the quality of workmanship and the careful planning that had gone into the building of this property.

“The workmanship truly is as exceptional as one would expect for a builder’s own home.”

Nigel and Jackie say that winning the Nulook Builder’s Own Home Award has benefited everyone associated with the building of this home, including architects, subcontractors, suppliers, builders and associated companies.

“Everyone feels very proud to have been part of this winning team and to have worked on constructing this impressive house,” Nigel says.