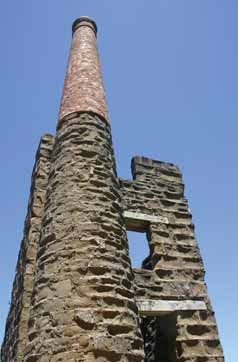 Just two years after Lieutenant-Governor William Hobson RN did his thing at Waitangi, a thin copper lode was discovered on Kawau Island. Four years later a mine was opened and for the next 20 years some 3000 tonnes of ore was extracted and smelted for copper.

Although the lode was not extensive, the orebody was rich. Near the surface the copper sulfides were well weathered and oxidised. Lower down was a valuable enriched zone below which lay the unaltered, low-grade primary ore.

The mining company clearly saw a big future in Kawau copper. It spent £23,000 building a village for miners in Garlick Bay (now known as Mansion House Bay), along with a flash house for mine manager Ninnis. By 1848 there were about 220 people on the island.

The copper lode ran roughly north to south. It outcropped on the coast where the main mine adit and pumphouse were located. Land was reclaimed to provide a platform for working and stockpiling ore prior to shipment.

The mine’s proximity to the sea meant the workings were prone to flooding and, after an initial attempt to clear the mine with a small pump, a substantial, traditional Cornish pumphouse was erected, housing a 50hp steam engine that powered a Cornish mine pump.

In January 1847 a shipment of mined sulfides reacted dangerously while being transported to Wales for smelting. As a consequence a decision was taken to smelt the ore on Kawau before shipment, and a works was built at Bon Accord Harbour.

The Cornish pumphouse at the mine and the smelting works were fashioned from Mahurangi sandstone blocks quarried on the mainland.

This rock was proving a popular building stone in early Auckland. It was readily available in bulk, easily worked, and its dark grey colour and rough texture were not unattractive.

Certainly, it provided a far more economic proposition to the extremely hard, jointed basalts that provided Auckland with an alternative building stone. The sandstone was used, among other buildings, to provide architraves, lintels and frames for the windows and doors of St Andrews Church in Auckland’s Symonds Street.

Within months of the church’s completion, the parishioners were noting deterioration in the dressed stone surfaces. In a couple of years great flakes were spalling from the blocks.

Plastered repairs proved of little avail and, in the end, it was found necessary to completely encase the sandstone in concrete.

The coarse sandstones that are such a feature of the Mahurangi Peninsula and the hinterland have a problem.

They contain a significant proportion of swelling clays. On exposure of the rock’s fresh surfaces to air following quarrying, these clays absorb moisture and swell. During hot days the moisture is expelled and the clays shrink.

The continued shrinking and swelling in Auckland’s humid, sub-tropical climate causes the surface of the rock to fritter and, eventually, for large flakes to fall away.

This process can be seen today on the base of the Kawau pumphouse chimney, one of the few structures that remain from the pioneering mining enterprise.

The basal blocks show deep concave scallops where a succession of flakes have fallen away. They contrast with the refractory bricks that top the structure and that have well survived the tests of time and storms of the inner gulf.

From the miners’ point of view, their sandstone buildings survived sufficiently long enough for them to exhaust the ore body.

The workings had closed by 1869 with about £60,000 worth of copper extracted from the richer ore.

However, the Mahurangi quarry had closed earlier, its illusory product unwanted even as fill.