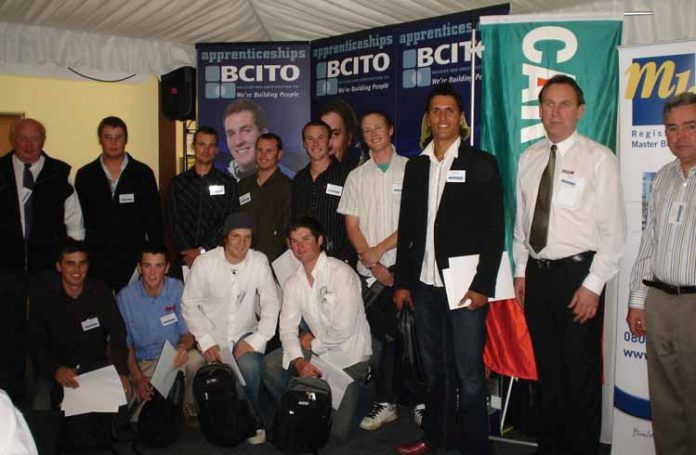 Three national finalists have been announced at regional awards ceremonies in the Registered Master Builders 2007 Apprentice of the Year, in association with Carters.

As part of an ongoing commitment to raise awareness of careers in the industry, key players in New Zealand’s construction industry have joined forces to find the country’s top carpentry apprentice.

Backed by principal sponsor Carters and supporting sponsors the Building and Construction Industry Training Organisation (BCITO), Registered Master Builders Federation (RMBF) and the Department of Building and Housing, this year’s competition is being staged in 10 regions around New Zealand.

Over the past few weeks, entrants in the competition have been interviewed by regional judging panels. Up to 10 finalists have been selected from each region, and the judging panels have visited a building site each finalist has been working at to determine regional winners.

Regional awards ceremonies are being held in seven other regions around New Zealand in October, before all national finalists head to Wellington to compete for the National Apprentice of the Year title in November.

Cameron Tocker, 20, of Nelson was announced winner of the Upper South Island region at an awards ceremony in Nelson. Second place in the competition went to Kirk Nicholas, 20, of Blenheim. Roger Townley, 22, also of Blenheim, was third.

Carters representative on the Central North Island judging panel, Trevor Parris, says choosing a winner proved to be a difficult task, as entries in the region were of an extremely high standard this year.

“All the entrants were motivated and enthusiastic about the construction industry, but Rhys displayed a true passion for building and great direction in life,” Mr Parris says.

“Rhys is focused on construction and displayed an excellent understanding of the practical and theoretical sides of the industry. He’s a very well-rounded and skilled young man, and an excellent role model for building apprentices.”

Cameron, Jacob and Rhys each received an Outward Bound leadership course worth $2500 and a study grant of $2000 for winning their region’s competition, and they now automatically become national finalists in the competition.

They will be flown to Wellington in November, with their employer and two family members to join seven other regional winners from around the country as they compete for the national title on November 5 and 6.