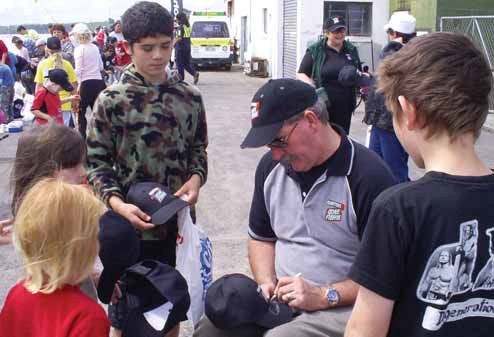 The aim of these events is to get the kids having fun in an outdoor marine environment, and to encourage parents to spend quality time with their kids. Fishing is fun! Below are some snippets on the most recent CKGF events.

Carters Waikato put on its second annual CKGF day in Raglan in October. About 300 kids turned out to fish off the Raglan wharf on an overcast spring day. Graeme Sinclair from the Carters Gone Fishin show, which screens every Saturday on TV3, was there to help budding anglers and sign everyone’s caps.

The local Raglan community got in behind the event, providing boat rides for the kids, while the local rugby club provided access to its facilities.

Registrations were processed at the rugby club, and there were several activities to keep the kids amused, including bouncy castles and mini jeeps.

There was also a police dog handling display featuring their two new “recruits” who were a major hit. From there, a free bus was shuttling everyone between the club and the wharf.

It was a really positive environment, with a lot of kids experiencing their “first fish” and “first boat ride” moments.

More than 225 kids turned out to fish off Wakefield Quay on a beautifully sunny November day for Carters Nelson’s annual CKGF event.

As with any of these events, local sponsorship makes a large contribution to the success of the event, and we’d like to take this opportunity to thank the sponsors for this event and the others nationally.

With 480 kids registered, Tauranga’s CKGF event went off with a bang despite overcast November weather. Great teamwork between the Police Blue Light team and Carters saw the day run almost without a hitch — the only sticking point was running out of sausages after cooking up 900 for the hungry hordes!

Graeme Sinclair was kept busy throughout the afternoon talking to avid fishermen and keen followers of his show, and giving away and signing more than 250 caps.
Keep an eye out for a CKGF event near you this summer!