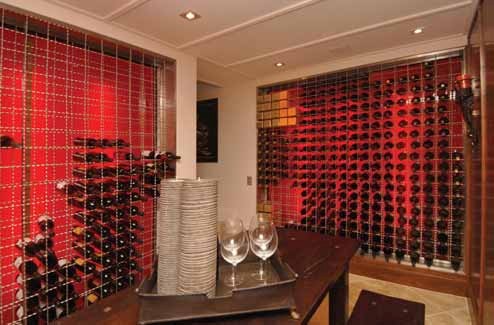 Home was constructed as a synthesis of tradition and innovation

The 1080 sq m home was built on the former Balmacewen tennis courts, and features seven bathrooms, an indoor swimming pool connected to the living spaces by a glazed sunroom, an underground wine cellar beneath the grand entry space, a chef’s kitchen, a home theatre and a Vantage home automation system (controlling everything from lights, heating, security, sound system and much more, all from touch pads throughout the house).

A stand-out feature, noted by the competition judges, was a mirrored-glass tile alcove in the foyer to display the owner’s pride and joy — a V-Rod Harley-Davidson motorcycle.

The owner, a Dunedin businessman, says the entrance to the home was designed around the motorcycle which he describes as a piece of art.

Selected from a field of 82 residential finalists, this supreme winning property was described by the competition’s national residential judges, Graeme Sutton and Rolly Adams, as “a modern interpretation of some of Otago’s notable stately homes”.

The multi-million dollar home had been a long time in the making. Work on the house started five years ago and required more than 100 pages of plans. The building of the home took 20 months, and landscaping a further four.

Coordinating all those who worked on the home was the biggest challenge for Mr Oskam. The sheer size of the project meant approximately 50 tradesmen were involved, making it vital everybody worked to the same high standards.

The home was constructed as a synthesis of tradition and innovation, with the highest level of craftsmanship and the latest technology employed throughout.

Mr Oskam credits the brilliant work of his subcontractors, as well as his desire for perfection, as the elements which made the home a supreme winner.

The house was designed by Mason & Wales Architects, with interior styling and decoration by Suzie Paynter, the kitchen and bathrooms by Ingrid Geldof Design and the landscaping completed by Ben McMaster.

These individuals, as well as the building team fronted by Mr Oskam, shared the same wish for the property to be one of Dunedin’s most prominent homes, and a desire to turn the home owner’s vision into a reality.

The exterior is clad in subtly textured, cream-coloured plaster, articulated with smooth borders that mark the various architectural elements of the building, and has zinc tray roofing.

The interior is crafted with an accumulation of patterns and textures that have been detailed into the floor coverings, timber profiles, joinery and ceilings.

An opulent level of finish is evident throughout the property, with splendid interior furnishings and comprehensive landscaping right down to the smallest of details.

The judges said the outstanding attention to detail and flawless execution made this home the standout winner of the 2007 competition.

“Sometimes in a field of exceptional high quality, one entry stands out and is a joy to experience, and this property created that magic,” Mr Adams says.

“The workmanship is flawless and the home is a credit to all those involved in its construction. It is one in which not only the builder but the whole industry should be justifiably proud,” he says.

“It is obvious those involved in the project forged very close, compatible relationships — the owners, the architects and the builder and his team have produced a most remarkable result. This home is a fine winner from a field of exceptional entries.”

While J J Oskam Builders Ltd has won the local supreme award three times, Mr Oskam was blown away to be awarded the national PlaceMakers Supreme Award and the 2007 House of the Year.

“Winning this title is the most rewarding thing I have accomplished in my 27 years of work in the building industry,” Mr Oskam says.

“The Registered Master Builders House of the Year competition, now in its 17th year, is highly regarded by the industry and the public, and winning an award in this prestigious competition shows the public that your business is capable of building homes to an exceptionally high standard.”

David Edwards, chief executive of principal sponsor PlaceMakers, is also conscious of the superior benchmark for building that the competition promotes.

He believes the Registered Master Builders House of the Year competition demonstrates the quality and high standards of building in New Zealand.

“PlaceMakers is proud to support this competition and help recognise and reward excellence in the construction industry. We congratulate all National Gold Reserve finalists and this year’s national award winners,” Mr Edwards says.

When asked what it takes to win a House of the Year title, Mr Oskam maintained that being “a fussy builder” was crucial.

“Builders should realise they are not just building a property, they are working on what will be someone’s pride and joy.”

Both the builder and the home owner should be incredibly proud of the finished product. It is this sense of satisfaction that the home owner and Mr Oskam feel for the Maori Hill property.
Mr Oskam recommends all builders have a shot at the competition.

“If you are thinking about entering the House of the Year competition, do it! Don’t hesitate!

“And if you don’t succeed keep trying because if you can accomplish success in the competition, it is the best possible way of lifting the profile of your company and of yourself as a builder.”