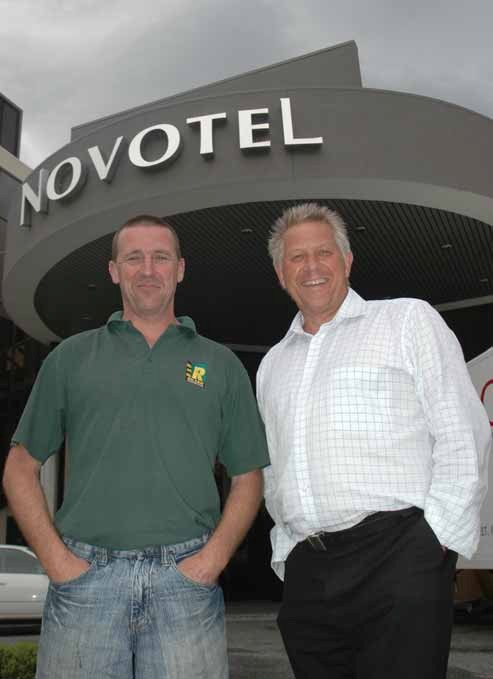 A $13 million refurbishment at Queenstown’s iconic Novotel Gardens Queenstown hotel has been completed on time and on budget. Queenstown registered master builders Rilean Construction handed over the final 50 rooms of the major 16-month project in December last year.

Novotel Gardens Queenstown is now the largest hotel property in the tourism resort, with 273 rooms catering for up to 546 guests — a 34% increase in potential guest numbers. General manager Carl Braddock says he is absolutely delighted with the end result and with the professionalism shown throughout by Rilean, which worked to a careful plan enabling the hotel to continue operating as various wings of the building were refurbished.

The first stage of development began in October 2006 with construction of 20 new rooms above the existing Church Wing. This stage was completed in March 2007. A similar expansion of the Earl and Horne wings began in April 2007, and included the renovation of public areas as well as the bar and restaurant.

Rilean senior project manager Trevor Meikle says the project involved the tightest timeframe he’d ever had — “eight months to do the first wing and six months to do the other two wings, so it’s a big pat on the back to all the subcontractors and a real milestone for us,” he says

Mr Braddock says to get to the end of 16 months of complex construction on a “working” building, let alone a hotel, is a massive undertaking. “To everybody’s credit, we have all emerged unscathed. Relationships between suppliers, the builders and the hotel, which you might expect to be tense, have gone really well,” Mr Braddock says.

“At the end of the day guests have been remarkably happy and a quality product has been delivered to the four-star market,” he says. “Not only do we now have the biggest hotel in Queenstown, but it is also the biggest Accor hotel in New Zealand. “We have 69 brand new rooms, 204 completely refurbished rooms, a 66-seat restaurant extension, a stylish new lobby, brand new gallery bar and new-look meeting room, all in the best location in Queenstown.”

Mr Braddock says the refurbished property will add 220 beds to the Queenstown hotel market, and will employ an additional 20 staff. The Accor hotel company bought the property in 2003, and Mr Braddock says the $13 million upgrade has been carefully thought through. “The company saw the potential in the market to add more rooms and improve infrastructure, capitalising on our unique location right on the shores of Lake Wakatipu,” he says.

But he says the upgrade is about much more than improved rooms and services. “It is about the real sense of pride that I see now among staff as they go about their business,” he says.