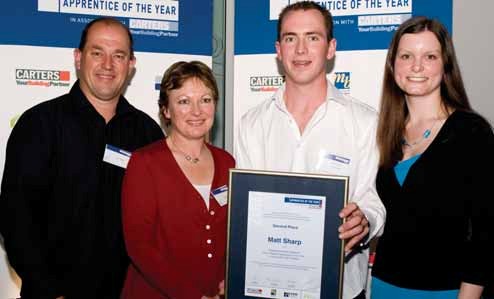 Wellington carpentry apprentice Matt Sharp says the key to a successful career is to “love what you’re doing”. The 25-year-old from Whitby, who was named runner-up in the Registered Master Builders Carters 2007 Apprentice of the Year national competition, is proof that being passionate about one’s work leads to success.

Matt gained second place in the national competition after competing against nine other regional winners from throughout the country at an event in Wellington last November. Central North Island apprentice Rhys Forsyth, 25, was first, and 22-year-old Southern region apprentice Blair Stuart was third.

Matt says he was encouraged by his employer at the time, Greg Parish, of G P Construction Ltd, to enter the Apprentice of the Year competition, a joint initiative between the Registered Master Builders Federation (RMBF), Carters, the Building and Construction Industry Training Organisation (BCITO) and the Department of Building and Housing (DBH). “My boss pushed the idea of entering. He thought I’d have a good shot at it,” Matt says. “It’s a good opportunity to set yourself a standard and to judge how you’re going.”

After winning the Wellington regional competition in October, Matt automatically became a finalist in the first-ever national competition, held in Wellington in November.  “It was really good to meet the other guys in the national final. I’ve been lucky to work with a few apprentices during my training, but some guys are the only apprentices at their workplace,” he says. “The national event was great too — I loved the awards ceremony.”

Matt’s wife Michelle and parents Pauline and John accompanied him to the awards event. “They were quite pleasantly surprised. My parents were a bit shocked when I won the Wellington competition, and then getting second in the nationals was great,” Matt says. “Everyone was rapt.”

RMBF chief executive Pieter Burghout is delighted to once again be supporting the competition, which is entering its fifth year in 2008. “The last four years have seen Apprentice of the Year go from strength to strength, and we look forward to another exciting year in 2008. The RMBF is proud to be supporting our country’s future industry leaders and celebrating their achievements,” Mr Burghout says.

Matt was very impressed with the prize packages he received in the regional and national competitions, which included a $2000 study grant, an Outward Bound course, tools from DeWalt and Patience & Nicholson, Standards New Zealand standards, education kits from DBH, an iPod Nano and branded merchandise from Carters and BCITO.

“I use the tools every day. I didn’t think I would use the battery powered skill saw, but it has been extremely useful,” Matt says. “I’ve been using it all day on angle weatherboarding up on scaffolding. It’s great not having to cart leads up there. “I haven’t decided what I’ll do with the study grant yet, but it would be good to do a refresher small business course. And I can’t wait to go on the Outward Bound course in August. Fantastic prize “It’s such a fantastic prize. It really opens your eyes and pushes you to the limit. It’ll be a good challenge and it will be great to see all the guys (Apprentice of the Year finalists) again.” Matt, who began his carpentry apprenticeship after completing a Bachelor of Commerce at Victoria University, says his family were very encouraging when he chose to begin a career in the construction industry.

“My Grandad’s a builder and Dad’s a plumbing tutor and had done a bit of general building maintenance-type work, too.” Matt is also quick to encourage more young people to choose a career in the trades. “It’s hard trying to work out what you want to do in life. At school I was encouraged to go to university because I had good grades. I think it’s sad that more people aren’t encouraged to enter the trades — it can be frustrating, but very rewarding, work. Fortunately the money is getting better in building now.” Real stepping stone

Matt, who is now self-employed and is also building a house for himself and Michelle in Whitby, says his Apprentice of the Year success was a real stepping stone in his career. “Industry leaders throughout the region pick up on things like this, it opens doors,” Matt says. “I’m sure it will help out with my career goals. “In the immediate future I would like to have our house finished by April. After that, I’ve got enough work to last me until the end of the year, which is good. Running out of work is a big worry when you’re self-employed.”

In the long term, Matt says he would like to enter the House of the Year competition. “It would give great personal satisfaction, and be a real challenge. After all,” he adds, “isn’t that what being a Registered Master Builder is all about?”

For more details about the 2008 Apprentice of the Year competition, see next month’s edition of Building Today.