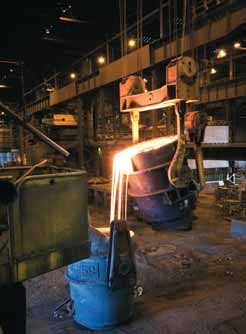 Steel is as in demand today as in the 1880s, when it first took centre stage as a building material — but much water has gone under this bridge in the intervening years. New Zealand Steel (NZS) market manager Chris Kay says steel’s strength and durability remain its trump card, but the focus on sustainable building puts these characteristics in an interesting new light.

“Steel is a keeper — and there are good reasons,” he says. Situated 60km south of Auckland, NZS is the country’s biggest steel manufacturer. It is unique in its use of locally mined ironsand rather than iron ore.

Incorporated in 1965, it produces 600,000 tonnes of steel a year and contributes around 1% of New Zealand’s GDP. It is a subsidiary of Bluescope Steel, which has 91 manufacturing sites in 17 countries.

According to the International Iron and Steel Institute (IISI), in 2006 global steel production reached 1.24 billion tonnes, an incredible 50% growth from 2000, the fastest growth rate in history. However, Mr Kay says, steel is a building material with a past, too.

Steel became economically viable for large-scale use only in 1855, when British inventor Henry Bessemer patented his Bessemer Converter. The machine could “mass-produce” an unprecedented 30 tons of high-grade steel in half an hour from molten pig iron — and builders saw the opportunity.

Steel was integral to the development of industrialised nations and high-rise construction. The resulting connotations left it in danger of becoming a victim of its own success, in particular since the 1980s, when sustainability credentials started to become a global public conscience issue.

“Then it becomes clear that steel is a competitive sustainable building material,” he says. Steel’s application possibilities in buildings go much further than its traditional role as the structural element in high-rise buildings and the building envelope in low-rise buildings, he says.

Builders today use it for many applications in high and low-rise buildings, including fastenings, foundations, framing, cladding, roofing, flooring, down pipes and decorating. He says steel offers builders many intrinsic advantages. A good example is to consider a steel framing system for a low-rise building such as a residential home. In this context, its advantages are it does not absorb moisture and will not twist, rot, grow moulds nor emit gases. Vermin or insects cannot infest it.

Lightweight and strong, yet not rigid, it resists the impact of earthquakes. It conducts energy straight to the ground, providing a building with extra lightning protection. In a house fire it may deform but will not burn. Its maintenance requirements are low, and it can be designed to be thermally efficient.  What comes around, goes around

“When sustainability is factored in, many of these advantages achieve a multiplier effect. Add to this technological advances that enhance its appearance, and steel comes out a logical preferred material in various applications,” Mr Kay says.

He argues that construction using any building material, including steel, impacts on the environment. Effects can occur through obtaining or extracting the raw materials, processing the raw materials and manufacturing the building material, issues such as waste and disposal thereof via landfill, transport and distribution of the product, the building process, and how smart the resulting building is and will remain in the future.

The life cycle, or “cradle-to-cradle” approach for measuring a building material’s environmental impact takes into account the abovementioned modelling parameters. “Industry role players must not be misled by isolated snippets of information given out of context. A number of agents around the world have performed life-cycle analyses on the environmental impacts of using steel. Based on the results, well-informed architects freely specify steel products in their various forms for projects of all sizes,” he says.

The global steel industry has actively improved its environmental record in mining, processing, dealing with waste products and recycling. It has never laid claim to a green image yet the issues of other sectors, such as destroying native habitats and environmental degradation so they can mine or grow, harvest, aggressively manage pests on the product, and dispose of toxic by-products and waste, are often conveniently ignored.

“Our issues and the way we deal with them are transparent and continuously improving. That’s why it’s important to compare building products with a cradle to cradle approach using the same modelling parameters for the analysis. Experts acknowledge the latter as the fairest way of assessing potential environmental impact,” he says.

He explains New Zealand Steel’s initiatives to remain in sustainable production. Even before achieving ISO14001 accreditation following the 1997 establishment of the ISO Standard, it already had environmental management systems in place. As a member of the IISI, NZS also actively participates in IISI policy commitments.

One such policy commitment is NZS’s zero waste vision. Steel generates minimal production, manufacturing, construction site and demolition waste. “Steel can be engineered off site to precise specifications, requiring minimal on site cutting. “And all steel waste has scrap value — steel’s second most endearing feature is that it’s 100% endlessly recyclable and suffers no product degradation in the process. More than 90% of commercial steel construction waste is recycled, and the average recycled content of the steel NZS produces is 10% to 15%,” he says.

In the past five years NZS added co-products to its portfolio. “This resulted in markets for what was previously steel manufacture waste and by-products such as slag, vanadium and iron dust. We recycle, reuse or resell nearly 80% of the total waste from the ironsand to steel process, and actively pursue new ways to reduce waste. “We’ve reduced the waste stream going into the on-site landfill by 60% in the past three years owing to targeted recycling and reduction programmes.”

The company also tries to keep the utility bills down. By recycling hot gases from the manufacturing process, it generates 70% of its electricity needs. Only 1% of the water it uses is discharged each day after being treated, while the remaining water is recycled and recirculated. Smarter for starters, smarter for longer

Home owners want low utility and maintenance bills, too. Mr Kay says the codes and standards that govern home building in New Zealand stipulate homes must be designed and constructed to last a minimum of 50 years.

“The frame’s contribution to the durability and longevity of the home is immense. It provides the strength, stiffness, geometric stability and load bearing capacity of the building. It supports the cladding, lining materials and most fixtures. Failure of the frame to fulfil this function may have grave consequences.

“Steel framing is dimensionally stable and will not settle over time, which is vital to prevent superficial nuisance defects in everything attached to it, such as sticking windows and sagging roof lines. “Such defects will push up the overall cost of ownership and may cause a loss of value,” he explains.

In his opinion, adding the time, labour, the effect of availability on the price, and the long-term cost to operate a structure as a secure and comfortable home make steel framing economically viable.

Steel is a heat conductor but the informed application of insulation and thermal breaks in the house’s design will address this concern. “Steel frames are flexible and enable the design, orientation and construction of thermally-efficient buildings to provide healthy, comfortable indoor environments and minimise total energy consumed in heating and cooling over their lifetime.

“The versatility of steel permits the integration of active and passive energy saving measures. All these save the householder money, and just as important, lessen the impact on the environment.

“Designing for efficiency may be more costly than using a lower priced building material, but from a life cycle perspective the total costs will usually be lower because the long-term benefits will continue over the life of the home.”

Mr Kay says what is true for steel framing is true for other steel building products. But direct comparisons between building materials remain difficult. However, he says if all else fails, one argument stands persuasively above all others: “Lightweight steel frames mean less strain on installers, and provide safer work sites.” • For more information on steel framing visit www.nashnz.org.nz.