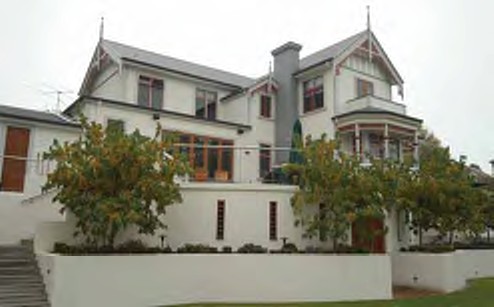 The restoration of a unique property in Nelson won A J Brown Building Ltd the PlaceMakers Renovation Award over $500,000 and the Mico Bathrooms Award in the Registered Master Builders 2007 House of the Year, in association with PlaceMakers.

A J Brown Building Ltd managing director Alan Brown says he knew from the outset that it was going to be a special project. “This house certainly had some soul,” Mr Brown says. “The brief was excellent, and the gratification of the client was obvious throughout the process. We did all the landscaping as well, and used the best quality materials and, of course, top workmanship.”

Positioned on a sunny, north-east facing hill behind a cathedral, the four-bedroom home is more than 100 years old and is surrounded by covered and uncovered decks. One large concrete patio leads to a beautiful swimming pool, while the master bedroom has its own private deck.

The master bedroom’s ensuite features a twin-headed shower, recycled bath, recycled timber and heated tile floor. An old fireplace in one of the home’s living areas was retained for its aesthetic value, as the house is kept warm by a gas central-heating system. The gate and front door are operated by remote control and the whole house is future-proofed, including the bedrooms being wired for high-speed internet access.

The large open-plan, country-style kitchen, fitted with high-quality appliances, has two separate work areas and there are five versatile living areas. Nearly the entire middle floor of the property can be opened up to create more space, while large French doors can provide privacy for entertaining.

Mr Brown says the renovation of this three-storey, inner-city Nelson home was a joint project between Arthouse Architecture, A J Brown Building and the owners. He initiated the pricing and preparation work on-site before handing over to project manager Dean Wareing.

“The project took around 12 months to complete, and there was extensive, room-by-room planning on top of that. We also made quite an accurate cost estimate, discussing exactly what the clients wanted to take out and put in. “We got the job through the architect, Dave Wallace, because of work we have done in the past — we are known to be sympathetic to clients’ needs during the renovation process,” Mr Brown says.

The project evolved slightly from the original plans, after rot was found throughout the house, he says. “The biggest challenge was moving a beautiful large east-facing bay window. We decided the best way to do this was to use a crane and extend the entire wall about four metres out on steel beams.

“This was definitely a favourite project to be involved in — the end result was just stunning.” The competition judges agree. “This is an immaculate renovation by a builder at the top of his craft. This extensive renovation has been so well executed that it’s hard to see where the addition has been made. The craftsmanship in the fretwork and detailed veranda was particularly outstanding.

“The spacious bathroom was quite something, with beautifully executed tile work and nicely integrated shower. “This is a grand extension in keeping with the grandeur of the original home.”

Mr Brown, who has more than 30 years’ experience in the industry, including running several businesses of his own and working for Wellington architect Roger Walker, admits the beginning of his career in the industry wasn’t exactly straightforward.

“I originally got into the film industry, processing photos and films for a company in Wellington, but my mother always thought I would be a carpenter,” he says. After making the decision to enter construction, he hasn’t looked back.

Mr Brown is excited about his current project — converting a 1903 building into three upmarket apartments called the Consulate Apartments, which he plans to enter in the House of the Year awards. “This year we have a new house in Marlborough entered in the competition, and feel that with our previous experiences we know what it takes to be recognised as a top master builder.”