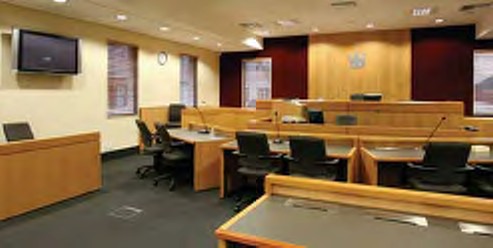 The first ruling on the new Queenstown Courthouse was unanimous — Naylor Love Central Division was judged the winner of the Seismic Industrial/Utility Project in the RMB 2007 Commercial Project Awards.

The upgrade of the facility to a three-storey 1700 sq m building is a dramatic improvement on the 100-year-old, single-storey 250 sq m courthouse the Queenstown judiciary has endured for several decades.

Opus Architecture’s Colin Corsbie and local architect Michael Wyatt kept the high profile location and the spectacular views of the surrounding mountains and Lake Wakatipu in mind when designing the exterior of the building.

A façade of exposed aggregate and coloured precast panels, copper awnings, high-level cedar cladding and colour steel provide distinct character and presence which, according to Naylor Love, “reflects the past while enabling the Courts Department to provide an efficient service to the community”.

Project manager Russell Kidd says Naylor Love became involved in the 11-month project via a negotiated package contract through Ngai Tahu, which began at the end of 2005.  “The final product didn’t differ much from the original plans as it was designed and all the specs were set before we began work on the courthouse,” Mr Kidd says. “The project wasn’t as simple as it seemed when I first looked at it. There was a tight time frame and a great deal of services and stringent security requirements for this special project.”

The basement consists of the custodial area containing four holding cells, a sally port for the safe loading and unloading of the accused, separate access to the courtrooms, as well as plant and storage rooms and secure staff parking.

Careful consideration was given to the harsh Central Otago climate, meaning double-glazed windows and passive solar controls on the outside walls were installed. These will minimise heat loss or gains, depending on the season, as well as providing excellent acoustic insulation.

In line with the court’s requirements, robust, low-maintenance materials and finishes were specified for the exterior and interior of all areas accessed by the public. The harsh climate was also a challenge for the Naylor Love team who worked through the Queenstown winter. “There were up to 40 people on-site at one time including subcontractors,” Mr Kidd says. “We had to operate at around 120% capacity as there are always people away at this time of year.

Staffing can be difficult as everyone in the area is either a tourist or a snowboarder.” According to the competition judges, this high-profile building is a credit to the construction team behind it.  “This spacious, modern building has many special features which required great attention to detail. The two courtrooms are beautifully finished with native timber panelling and mouldings which show a very high standard of workmanship,” the judges said.

Mr Kidd says the upgrade of the courthouse has been one of his favourite projects during his time at Naylor Love. “The conversion of the old courthouse into a pub — aptly named Guilty — was also an excellent project,” Mr Kidd says. “The restoration began after the tenants (Ministry of Justice) moved into the new courthouse. It required a full seismic upgrade, and we re-used a lot of the old materials.”

Mr Kidd, who was introduced to the industry through his builder father, completed a Bachelor of Construction by correspondence through Massey University, and holds a National Diploma of Quantity Surveying.

“One of the biggest challenges I’ve faced in the industry is probably being so young — I’ve only been in the business for seven years,” Mr Kidd says. “Naylor Love has a really good support structure though, and is a really good company to work for.

“We’re currently working on an 18-month project — the new Post Office building in the same precinct as the courthouses — which we’ll probably enter in the competition when it’s finished,” he says.

As for the 2008 House of the Year and RMB Commercial Project Awards, the Naylor Love Central Division team is hopeful of another favourable verdict in the competition, with several entries including the Pig & Whistle bar with offices on the upper level, and the old courthouse pub.