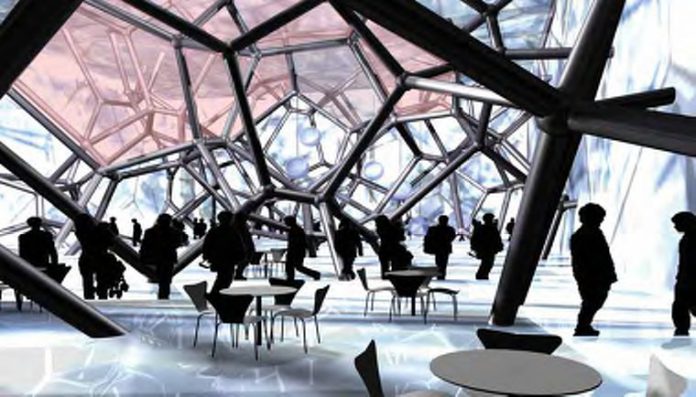 Among the many venues hosting the Beijing Summer Olympics, few are more likely to attract comment as the National Aquatics Centre. This new venue has been built right alongside the Beijing National Stadium, smack bang in the midst of the Olympic Green. It has already been informally christened The Water Cube or, by the Nerds-Among-Us, [H2O]3 — and for a very good reason.

In the words of architects PTW: “The so-called Water Cube associates water as a structural and thematical ‘leitmotiv’ with the square, the primal shape of the house in Chinese tradition and mythology.

“Unlike traditional stadium structures with gigantic columns and beams, cables and backspans, to which a facade system is applied, in the Water Cube design the architectural space, structure and facade are one and the same element.

“Conceptually, the square box and the interior spaces are carved out of an undefined cluster of foam bubbles, symbolising a condition of nature that is transformed into a condition of culture.

“The appearance of the aquatic centre is therefore a ‘cube of water molecules’ . . . “In combination with the main stadium by Herzog de Meuron, a duality between fire and water, male and female, Yin and Yang is being created with all its associated tensions/attractions.” Kinda says it all, doesn’t it? Engineers Arup were responsible for developing the main structure, built by the China State Construction Engineering Corporation (CSCEC). It comprises a 100,000 sq m steel spaceframe, clad with ETFE pillows 0.2 mm thick, making it the largest ETFE-clad structure in the world. The cladding allows greater penetration of light and heat than glass, resulting in a 30% decrease in energy costs.

During the games the Water Cube will host the swimming, diving and synchronised swimming, along with chants of “Ozzie! Ozzie! Ozzie! Oi! Oi! Oi!”, expected to drown out the Chinese Thunder Sticks.

The centre occupies 65,000 sq m. During the games up to 17,000 spectators can be accommodated, but afterwards this will be reduced, possibly to just 6000.  The new venue has already scored one major international award, being credited with “The Most Accomplished Work — Atmosphere Section” at the 2004 Venice Biennale. It is a true masterwork, in the original sense of the term.

In making its award, the Venice Biennale Jury observed: “The project demonstrates, in a stunning way, how the deliberate morphing of molecular science, architecture and phenomenology can create an airy and misty atmosphere for a personal experience of water leisure.” Yeah, right. Popular Science included the structure as among the Best of What’s New in Engineering in 2006. “Water becomes a profound ‘building material’ that de-materialises the building in a  meaningful way” . . . “The structure of water softens and dissolves all the boundaries, and gives the sophisticated ‘micro’ details to the monolithic totality. The sophistication and  funness of the components and the simplicity and monumentality of the whole gives the building an interesting duality.”