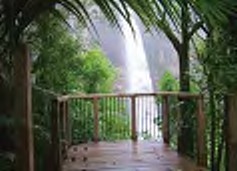 When MBL Construction (MBL) owner David McLachlan saw the tender for the Department of Conservation’s (DoC) Te Toto gorge and Bridal Veil Falls viewing platforms in the Waikato being offered on GETTS, he jumped at the chance to work on such a challenging job.

Even though DoC had never heard of MBL, they decided to give them a crack at it. David believes that being a Registered Master Builder made all the difference. He did his apprenticeship way back in 1964, so he’s been building for donkey’s years.

However, the four viewing platforms — one at Te Toto and three at Bridal Veil Falls in Raglan — offered unique challenges to the MBL team that David hadn’t encountered before. Before work started, a number of things had to be taken into consideration. As both of the areas are sensitive to local Maori, the blessing of the Tainui Iwi was required. In addition, the whole building team had to attend a three-day fall safety training course as the Te Toto platform is on the edge of a 60m drop into an extinct volcano.

The team then swung into action, taking on the Te Toto platform first. The platform itself is essentially a cantilevered viewing deck with a base made up of four 400mm diameter poles laid horizontally and tied down at one end to a seven tonne concrete counter-weight.

The cradling beam was supported mid-span by poles 300mm wide and four metres long, which were placed into pre-drilled holes in the crater rim’s rock base. MBL decided to pre-cut and assemble the whole platform at their depot in Whatawhata before reassembling and positioning it on the crater site by crane. Once the steel handrails were attached, the team moved on to the next challenge at Bridal Veil Falls.

Unlike Te Toto, the 1km track into the Bridal Veil platforms could not be serviced by trucks or cranes, which slowed things down considerably. All materials had to be trolleyed in with the help of a four-wheel bike and a 1.5 tonne excavator. And the logistical problems didn’t end there for David and his team.

“We had to make up special three metre extensions to the 350mm diameter borer to reach the depths required. Existing structures were utilised to position the digger, enabling the bore holes to be placed. Too heavy for the digger to lift, the poles were slid into place on improvised timber slides strapped to adjacent trees,” David explains.

Throughout the construction, David was in daily contact with the Auckland engineers, keeping them posted on the team’s progress. Contract management, programming and problem solving were all done by email on site.

To make the project even more challenging, all work was performed during the winter months, so the team also had to contend with incessant rain and mud, as well as starting and finishing each day in the dark.

“It was so dark coming back through the bush track one night that we relied on the light from glow worms to light the exit track — no kidding,” David says. With the work on both sites completed, David is pleased with his team’s efforts, and believes that the platforms have exceeded the expectations of the client. “Speaking to DoC staff recently, they talked about the great job we had done under difficult circumstances and conditions, and for that I am very proud.”