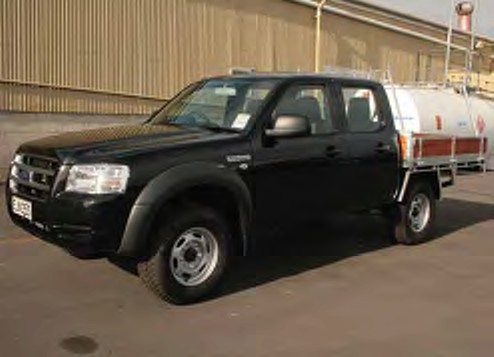 What do you do when you’re a car company and your customers ask you to add a little more diversification to an already extensive range that makes up one of your more significantly better selling vehicles?

Well, if you’re Ford, you listen and then you go back to the assembly line and you tell them you need a couple of changes made and you deliver the goods. This is precisely what’s happened in the case of the Ford Ranger.

In April, Ford’s light commercial offering sold 266 units, in both 4×2 and 4×4 variants. Year-to-date, that figure is 991, putting Ford just a skosh behind the market leader. Having said that, Ranger was Ford’s best selling product in April and, in any case, the gap between Ford and its nearest rival is quite marked, so obviously the team in Thailand have screwed together a pretty good product — a worthy successor to the long-serving Courier.

So when the time came to start producing “special request” vehicles with strong sales figures to back up its requests, Ford New Zealand could justifiably hold up its hand and make a case for them.

And it would seem there is a case for a double cab, cab chassis version of the Ranger, because Ford’s Thailand plant has just produced one. The argument for the cab chassis is the need for more flexibility in the cargo hauling stakes, while retaining the passenger potential of the ute.

Until the arrival of the double cab chassis cab, the Ranger line-up of 16 vehicles offered single or space cab chassis cabs, but neither of these made allowances for carrying more than two people at a time.

And while that’s fine for the working week, when the time to roll out with the family for the weekend comes around, a two-seater ute is not terribly practical. To look at, the Ranger XL double cab chassis cab looks like a conventional double cab ute, minus the tray, and that is precisely what it is.

As a result, you’ll find it runs the 3 litre turbo charged diesel with 115kW of power on tap at 3200rpm and 380Nm of torque at 1800rpm, which allows the Ranger to tow up to 3000kg with a Ford-approved heavy duty towbar, fitted as an option.

Ford tells us there seems to be no call for an automatic version of the same vehicle, nor a 2WD variant. Which makes perfect sense for down on the farm applications, but perhaps not so much for the weekend recreational warrior. Right decision

However, given that the requests for this vehicle seem to have come largely from the rural sector, perhaps Ford New Zealand has made the right decision. You would certainly think so considering the company has ordered about 75 of the tray-less Rangers, obviously expecting a reasonable uptake.

For those in the chippie trade then, if a tailor-made tray with the convenience of a double cab is what you’re looking for, you had best be in quick. Being an XL model, the Ranger runs 15-inch steel wheels, with the wheel arch flares, and carries the XL safety package of front and side airbags, ABS brakes with electronic brake force distribution, air conditioning and Ford’s Passive Anti-Theft system (transponder key).

The Ranger also picks up an MP3-compatible stereo with single CD, remote central locking, tilt adjustable steering and cloth seat trim for the front reclining bucket and rear bench seats. Now, this last bit is interesting. Many double-cabbers tend to show up their weaknesses in the back — insufficient leg room, folding seats as opposed to fixed, lack of head room, space for two adults and a dwarf — all of these are regular complaints about seats in the rear of double cab vehicles.

The rear of the Ranger accommodates three adults comfortably with plenty of leg and head room on a reasonably comfortable and supportive seat, indicating that someone, somewhere actually took the time to consider rear seat passengers.

At time of writing, Ford was preparing the double cab chassis cab for its debut at National Fielddays, which meant we couldn’t actually take it away and play with it. We did determine the price however, and at $47,090 plus on roads, the tray-free Ranger model is well priced to slide into the range of Ford’s toughest workers.