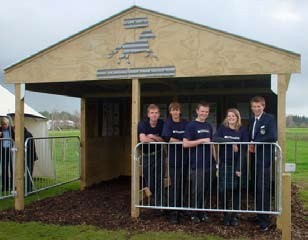 A group of students from Cambridge High School has won the BCITO 2008 Build-Ability Challenge.

Their winning project was a horse hospital they designed and built for the local Riding for the Disabled Group.

The Build-Ability Challenge is part of the Building and Construction Industry Training Organisation’s Building Careers Month held during August, and involves teams of students building a project for a local community group.

The horse hospital, which can provide shelter for up to four horses, was designed and built by five year 11 to 13 Cambridge High School students over a four-month period.

The structure features a trough accessible to horses from both inside and outside the shelter which is filled from rainwater collected off the roof.

The judges commended the Cambridge team for the quality of their workmanship and getting local community support behind an ambitious project.

The students had compiled an impressive record of work for the project, integrating photographs and commentary to produce a comprehensive story of the construction process.

Hamilton Boys High School and Central Hawke’s Bay College were highly commended for their entries of a garden seat for Sunningdale RSA Rest Home in Hamilton and an outdoor playground structure for Anglican Childcare in Waipukurau respectively.

The Hamilton Boys’ team of five year 12 and 13 students created a sturdy garden bench with the rest home residents specifically in mind, while the Central Hawke’s Bay College team of year 13 students made play equipment suitable for toddlers through to five-year-olds.

Now in its fourth year, 18 teams from 16 schools around the country competed in the Build-Ability Challenge. The aim of the competition is to give students a chance to experience the positive impact they can have in their community through skills such as building, as well as to experience the demands (highs and lows!) of a real building project.

Each team had to work with their client to develop a brief, then design and construct their building project.

Teams had to produce a detailed Record of Work for their project — just like a real BCITO apprentice. The ROW, along with an onsite evaluation of the workmanship, determined the final marks.

BCITO chief executive Ruma Karaitiana is thrilled with the success of the 2008 challenge.

“It is a pleasure for the BCITO to continue our relationship with schools and their local community organisations. We know that schools and their pupils also value this unique experience to learn about careers in construction,” Mr Karaitiana says.

“The students get to work on the project from the initial commission and design stage through to its installation, just like they would out in a real working environment.”