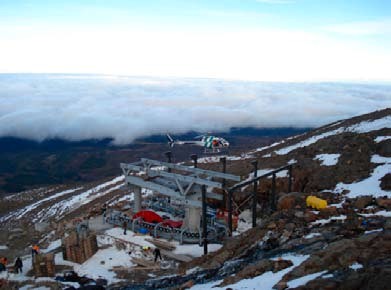 So when the new “High Noon” chairlift project on Turoa skifield was proposed by Ruapehu Alpine Lifts Ltd, Matamata-based Stanley Group jumped at the chance to take on such a unique challenge.

Construction manager Craig Davison believes it was Stanley Group’s extensive experience with helicopters and alpine environments that secured them the project, along with “the right, can-do attitude to get the job done”.

The $12 million project is a high-speed, six-seater, detachable chairlift, with the bottom terminal also functioning as a chair storage unit.

Construction of the terminals at each end of the chairlift started in October 2006, and was completed in June 2007.

The 1.4km “High Noon” lift has some impressive stats. Not only is it the highest lift in Australasia, terminating at 2322 metres above sea level, it also boasts an impressive speed of five metres per second. This means it can comfortably transport up to 3600 people to the top in a single hour.

The conditions on Mount Ruapehu are a far cry from your typical building site, and presented their own set of demands on top of the construction challenges.

Working within Tongariro National Park with its world heritage status meant that extreme care is needed to be taken every step of the way to maintain the integrity of the natural environment.

In addition, safety on the mountain was a huge issue for all involved. Project manager James Simpson has been working with Stanley Group on outdoor projects like this for more than 14 years, and he’s more than aware of the dangers present when working in alpine conditions.

“Weather and remoteness are the two biggest factors,” Mr Simpson says. “We spent thousands of dollars on the correct gear for the guys to wear. Working on the mountain means just one wrong weather call or one bad mistake, might mean people could die.”

Once the team was kitted out, they set about their first task — blasting a hole in the side of the mountain to make space for the larger bottom terminal.

Concrete foundations were then laid down on the site in preparation for the structural steel framework to be installed.

The steel components were made in Tauranga before being trucked to Turoa and finally flown into position on site by a Squirrel B2 helicopter.

Once constructed, the precast concrete panel cladding, which was fabricated in Matamata and trucked to Turoa, was then flown to the site using a Russian ‘Mil’ five-tonne lifting capacity helicopter and clamped into position.

The remote conditions meant that helicopters had to be used to transport all materials up the mountain. And as most builders will be aware, using helicopters isn’t cheap, so over-ordering wasn’t an option.

Helicopters also require strict safety measures, so the site had to be spotless, as even one rogue piece of plastic can cause havoc when the helicopters are near the site.

Due to the conditions, a lot of thought was given to the type of materials used. As both terminals are wet buildings, plywood lining was used on the interiors.

On the outside, exposed aggregate panels were installed to take a beating from the environment, and Danpalon and Perspex were used for the windows, as regular glass can shatter in blizzard conditions.

The team used 10mm plate steel on the top terminal roof so the whole structure could support the weight of a two-tonne snow groomer, enabling it to plough snow off the top when needed.

Because the work took place within a world heritage park, DOC was consulted every step of the way, especially when it came to the materials used on the outside of the terminals. A darker, basalt aggregate was eventually chosen for the concrete panels to be more in keeping with the surrounding environment.

Once construction was finished, the lift was ready for business. It’s early days yet, but so far feedback has been very positive.

“This is the biggest-ever, one-off project for the area,” Mr Davison says. “It’s certainly generated a lot of interest and we’re really proud to have been a part of it.”

The project has been named as a Gold Reserve National Finalist in the Pacific Steel Industrial/Utility Commercial Project category in the Registered Master Builders 2008 House of the Year and RMB Commercial Project Awards in association with PlaceMakers.