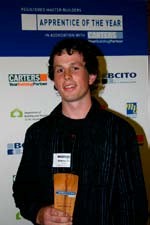 Mathew was presented with the award at a ceremony in New Plymouth last month, the first of 10 regional events taking place around the country during September and October.
He will compete against top apprentices from around the country at the national Apprentice of the Year finals in Wellington on 21 and 22 October.

Mathew, 20, is completing his carpentry apprenticeship through the Building and Construction Industry Training Organisation (BCITO). He is employed by Wood Robson Ltd, and is working on his second house-building project as onsite foreman.

BCITO representative on the judging panel Tony Greeve says entries in the Central North Island region were of a high standard, and all the entrants were excellent ambassadors for the building industry.

“Visiting the finalists at work gave the judges a great opportunity to see them in action,” Mr Greeve says.

“Matthew has an excellent understanding of what is involved in successfully running a project, and his rapport with clients is outstanding. Mathew showed the judges that he thinks for himself and has stepped up to take on greater responsibility.”

Chief executive of principal sponsor Carters, Stuart Munro, is delighted with the continued success of the Apprentice of the Year competition, now in its fifth year.

“This competition is a great way to promote the excellent standard of building in New Zealand and celebrate the achievements of our country’s future industry leaders.”

Celebrity builder John “Cocksy” Cocks was MC for the night.

Mathew received an Outward Bound leadership course worth $2500, a study grant of $2000, and a variety of tools for winning the competition.

Kerry and Brad received prize packs from Carters, including tools and products from Hitachi, Stanley, Irwin Industrial Tools and Wholesafe, and branded merchandise from the BCITO. All entrants in the competition received an apprenticeship membership to the Registered Master Builders Federation for one year.