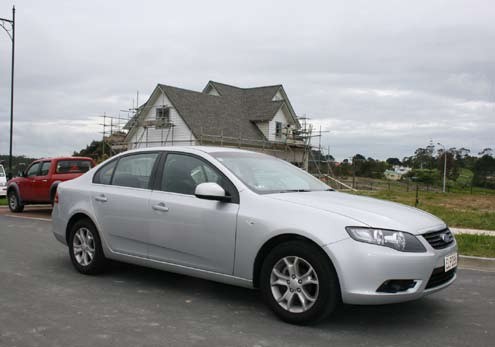 So it’s time to replace the faithful ute which has served you so well over the past three years? Now you have a problem, and it’s in the form of attitude — not yours, but your lady’s.

“You always go and buy utes. Why can’t you go and buy something sensible? Something we can go to town in.

“Once and a while it’d be nice to go to the movies and not have to worry about getting a messy skirt because of your ‘high ground clearance’ truck.

“All my friend’s boyfriends have nice cars — why do we have to use your grubby double cabber?”

Yeah? Heard these conversations before lads, or something similar?

But you need to have that vehicle which works with you as a vehicle partner on the building site, something that can handle the tough stuff.

Now though, it also has to look good for when you and your lady want to go into town. It’s so hard to find the right car for the job these days, isn’t it?

Aha, and there’s the magic word. Note we said “car” not “vehicle”.

Sometimes, a car is the right vehicular partner, even when you’re on the job. And naturally enough, when it comes to cars that can handle the tough stuff, Ford has the answer for you.

In this case, it’s the new Falcon FG — and not the one you think it is either. You thought we were going to say the Boss V8, right? Or maybe the F6 turbo-charged version? Nope, wrong again, sorry.

Our pick of the Falcon flock is the sleeper in the deck — the XT entry-level model, which gives you the best bang for buck, all the trimmings and perhaps one of the best rides in the 2008/09 Ford line-up.

You might think so, but then I’ve driven them all and I reckon the XT, even with its teeny tiny 16-inch alloys, offers the best in chassis dynamics. And there’s a motoring chappie in Christchurch — an expert in chassis dynamics — who agrees with me.

For the purposes of this report, we “acquired” a Falcon XT from the helpful lads at North Harbour Ford, and tried to unsettle the XT on a tortuously twisty piece of highway just north of Albany.

As expected, the XT gave as good as I remembered from the Australian launch earlier this year — which is to say, it blew my socks off with its confident cornering and serene stability.

Yes, it has dynamic stability control which certainly helps, but the whole size of the car — this is a Falcon remember, not a small Euro Buzz Box — is so well suited to its suspension and floorpan that body roll has all but now become a thing of the past.


Everything at your fingertips — almost

Sitting in the Falcon, you have everything at your fingertips — well, almost everything. You don’t have a remote fuel filler cap for a start. It’s a totally manual system and it’s on the left as per Henry Ford’s sinister tendencies of designing everything for a Southpaw like himself.

However, as far as all the essentials are concerned — boot release, cruise control, wheel-mounted audio controls, dual front and side airbags, ABS anti-locking brakes, traction control, a six-speed sports shift gearbox with clutchless manual option and very comfy seats for five — the Falcon XT has it all and more.

And the cockpit has been well designed to give the driver an extremely comfortable driving position, maximising visibility and control.

Externally, the XT Falcon looks as good as anything in the FG Falcon line. It has subtle styling changes from the BF Series — or so you might think — until you see a BF up alongside an FG, at which point the differences become excruciatingly obvious.

It’s easier to believe that the FG is an all new body design when seen against its predecessor.

As far as the engine goes, yes, this is still the inline six cylinder which we are so used to seeing in the Falcons, but this will be the last of the I6.

A new “corporate V6” is planned for introduction very soon to keep abreast of emission and environmental considerations.

However, this is not to say that the current I6 has not been “breathed on”.

Ford’s Australian techos have done some serious refinement on the I6 which has effectively reduced its CO2 output and made its fuel economy figures much more appealing — down to under 10 litres per 100km, according to Ford. This, for a car the size of the Falcon, is pretty good.

Will the XT Falcon work for you on the building site? Perhaps not as well as a Ranger might, but it will cope.

Will a Ranger work for you in the romance stakes? Definitely not as well as a Falcon will!