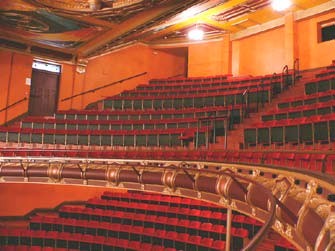 ‘Best brains right on our doorstep’

The arched roof has been dubbed an architect’s dream but an engineer’s nightmare. However, managing director Mike Patton says the firm enjoys unique one-off challenges such as this roof.

“It’s a very visible and high profile building, and one that the entire team can be proud of being a part of,” Mr Patton says.

The roof, which covers the 27 metre long plaza courtyard adjacent to the Hawke’s Bay Opera House, was an integral part of the full-scale restoration and refurbishment of this iconic Hastings building.

The architect’s vision for this part of the Opera House makeover was for a mechanical roof structure that retained the openness of the plaza while making it an all-weather venue.

Hastings mayor Lawrence Yule says a worldwide search for an engineering firm that could construct the roof eventually led the council back to its own district.

“It turns out that, right on our doorstep we have some of the best brains, the best engineering and the best technology in the world,” Mr Yule says.

“The architects had all the ideas and these guys transformed them into reality. It had to work but it had to look good too.”

The end result is a “tri-truss” structure over the courtyard that supports a lightweight retractable roof.

The roof material is made from a high-tech PVC sail material, and is able to be retracted to a central point with relative ease. Each truss weighs six tonnes, and they are 12 metres high above the plaza.

As project managers, Patton Engineering was heavily involved in the design process, along with being responsible for the construction, finishing, transportation and installation of the trusses.

In addition to this, the company was also responsible for design and construction of the mechanical components.