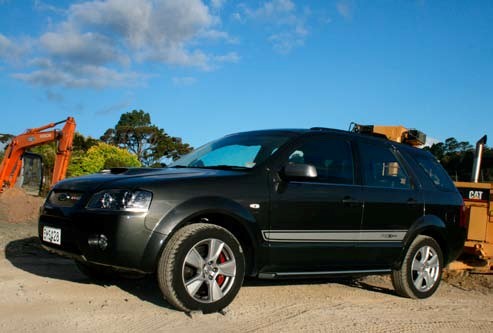 When Ford announced it was handing over the very successful Territory to the performance people who peak and tweak their product — FPV — I asked the question: “why?”

After all, Ford already had a turbocharged version of its SUV and it was doing the bizzo of being a flasher version of the normally aspirated rig just fine.

But, obviously, the powers that be at Geelong thought an FPV Territory seemed like a good idea, so who am I to argue?

The FPV Territory — or the F6X to give it its proper name — was a while in the wings before we worldly writers got to see it in Australia at its debut.

At that event especially, it was hard to do a direct evaluation largely because we toured on roads I’d never been before. Trying and noting identifying features at the same time as travelling in 32°C temperatures was a bit of a mission.

So we came home and about a year later the F6X came to live at the house of ill repute (mine) for a week.

And, again, I was faced with the question: “why?”

OK, the FPV crew have really done some clever stuff under the bonnet and the F6X seems to leak its kilowatts all over the driveway, it has that many to spare.

There are 270 of the little buggers making the six pistons do a very enthusiastic version of in-line dancing with requisite “yeehaahs” from the driver and passengers when the noise pedal goes down.

Then there’s talking the torque. 550Nms gives more pulling power than the average schoolboy and makes the Super Territory a formidable force on the open road.

There is a slew of engine tweaks to get all this power and torque, and I could go highly technical, but you can get that from your Ford techo. That leaves me more room to mention the other things the F6X has to offer.

There are customised leather seats, a specifically designed steering wheel, upgraded brakes from Brembo and little FPV touches such as personalised name plates in strategic locations.

The standard auto six with Sequential Sports mode has been reconfigured to cope with all the grunt you get from under the bonnet, and gives a much more aggressive feel to launch and shift patterns.

This is no wussy truck — it’s all about power — but it has a degree of refinement that’s unmistakeable.

Even with all his knowledge, I was still struggling for what to say, so I cheated. I introduced a lady friend of mine, new to the world of exotic cars, to the F6X, and asked what she thought:

“Lets see . . . lovely to drive and it has really pretty dashboard lights, so lots of night time outings are a must. On the negative side, it uses lots of petrol (14.9 litres per 100km factory), the steering wheel is too fat and the mirrors make cars look a lot closer than they actually are.

“The latter just takes a bit of getting used to, but the steering wheel really could do with being thinner.

“Lovely car overall though — spacious inside and it has a great stereo system. I love the dual air conditioning controls which allow the writer to be toasty and warm while her boyfriend gets to stay nice and cool.

“A great backing camera adds extra security and safety for reversing. This does take some time to get used to though, and you will find yourself thinking ‘duh, forgot about that’ at first.

“You still need to watch where you’re backing, but it’s great to know what’s behind you that you can’t see — don’t want to go driving over those ducks or that favourite toy which has inadvertently been left sitting in the middle of the drive. And you never can be too sure that there’s no little old ladies standing behind your car trying to pick up the 50c they may have dropped.”

Not especially technical, but certainly reflective of life in the real world. As to the rest, the F6X does offer sharper steering response than its more sedate siblings, and the finishing does make a stand-out difference.

Ford’s clever “go faster” stripes shouting the kilowatts along the side certainly attracts attention and, yes, command respect. The bulging bonnet is not easy to ignore either.

So yes, the F6X Territory does do things the turbo Territory doesn’t — mostly it gets you noticed, but it will deliver the goods on the street. This is no Claytons Cannon — the F6X is the real deal when it comes to making a statement.

That statement is probably best summed up on a bumper sticker which should come as standard on the F6X: “Yes it’s mine, yes it’s fast and no, you can’t drive it.”

At $79,990, the F6X is definitely one for the tradie who’s going from a one-man band to a 20-subbie contractor but, hey, it’s nice to have something to aspire to, isn’t it?