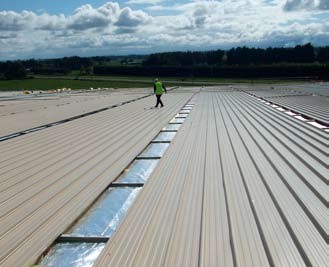 When Foodstuffs and ProArch Architects of Palmerston North designed their new warehouse and decided to push the limits of roofing they looked to Dimond and the Dimondek 630 roofing profile.

Shane Lewer, of ProArch Architecture Palmerston North, says without the on-site roll forming capability, the design of the building would not have been possible.

The ability to run full length sheets without overlaps or stepping has provided better assurance of weathertightness and cost effectiveness for Foodstuffs.

With the on-site roll former, costs and time have been significantly reduced. Combined with the Dimond’s patented continuous plastic clip system, this has seen up to 2290lm laid per day.

The continuous plastic clip system’s interlocking feature avoids issues with sheet creeping, and also allows thermal expansion and contraction of the roof sheets to occur without creating unnecessary wear from the clip surface.

“The project has benefited right from the start in having the knowledge that the product was available and the project team could move forward with confidence,” Mr Lewer says.

With completion of the job due in February, Building Today will keep you updated on the progress of this ground-breaking job.