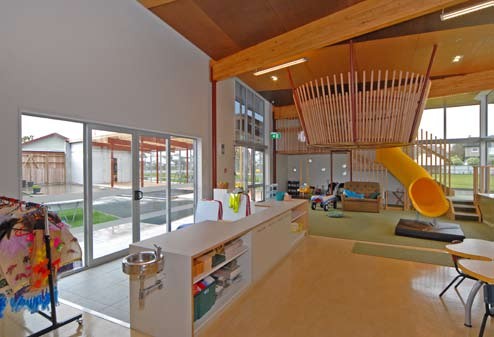 When McMillan & Lockwood PN Ltd took on the task of constructing a Maori immersion school in Palmerston North catering for preschoolers up to high school students, they knew they had a challenging project on their hands.

However, all the hard work paid off in November last year when the project was awarded national winner of the Education Project category at the Registered Master Builders 2008 House of the Year and Commercial Project Awards, in association with PlaceMakers. Mana Tamariki, as the project was named, is one of the first examples of a kohanga reo (early childhood centre) and kura kaupapa (primary and secondary schools) combined under one roof.

“One of the most difficult tasks was setting out the geometry of an architecturally-inspired complex of buildings,” Mr Chawynski says. “Weather was also a significant challenge at times — we ended up having to install glue-laminated weather beams in the rain! “However, with the exceptional skill of the team on site led by project manager Barry Robin and site manager Tom Pine, we were able to tackle these challenges head on.”

Mr Chawynski says a key goal of the project was for it to be sustainable, aligning with Mana Tamariki’s philosophy of fostering and sustaining te reo Maori as a living language. All construction materials were sustainably sourced, and materials recycled from buildings demolished on site were integrated wherever possible. “The project team was extremely committed to achieving a result that would promote sustainability and create a building that would help to foster the Maori language.”

At just 34 years of age, Mr Chawynski already has more than 13 years’ experience in consulting and construction companies, starting out as a cadet building surveyor. Originally from Melbourne, his career path has also allowed him to be involved in construction and project management while he was completing a doctorate in philosophy from the School of Engineering and Science at Swinburne University of Technology in Melbourne during the evenings.

After relocating to New Zealand, he worked for several years in the deep south, including spells in Te Anau and Queenstown, and two years in Invercargill, before moving to Palmerston North to manage McMillan & Lockwood.

In his two-and-a-half years at McMillan & Lockwood, he says the biggest challenge he has faced is ensuring that the company continues to win big projects while maintaining a manageable workload.

“I’ve been involved in some great projects, including Mana Tamariki and my personal favourite, the Hopkirk Research Institute at Massey University. “But the challenge is to always keep the momentum going. Achieving success in the RMB Commercial Project Awards was a great boost to the team and has inspired us to continue to build on the quality and excellence that McMillan & Lockwood is renowned for.”