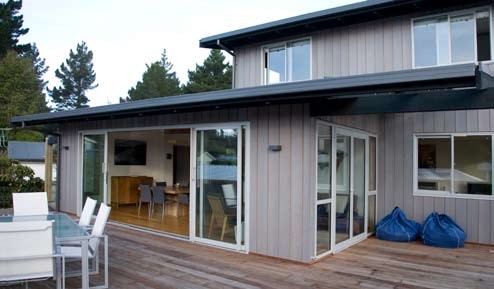 McKenzie Builders Ltd’s sleek renovation of a beachside home in North Canterbury was a winner with its clients and the judges of the Registered Master Builders 2008 House of the Year competition, in association with PlaceMakers.

The contemporary beach house took out the national award in the PlaceMakers Renovations $250,000 – $500,000 category at the awards ceremony last November. McKenzie Builders Ltd owner Louie McKenzie says the project was an exciting opportunity but also had one very rare benefit.

“The location was great for me as we only live four doors down the road. This meant that if there were ever any problems the team could always come down and bang on our door,” Mr McKenzie says.

The project required McKenzie Builders Ltd to overcome some significant environmental challenges, as well as strict local authority compliance requirements. The project also used a number of building materials to create an end result sympathetic to its natural surroundings. “Because the property was in a coastal sea spray zone it meant we had to work around a few obstacles. It all worked out in the end though, despite a few restrictions.”

The owners had a clear idea about what they wanted so, with the help of architects Sheppard and Rout and McKenzie Builders Ltd, the final product didn’t deviate much from the original plans.

The competition’s judges were impressed at how the beach house fitted in with the surrounding iconic bach dwellings, and the workmanship that went into the project. “There is a real sense of craft when you enter the home. The detailing and finishing is of an impeccable standard. The builder had a strong relationship with the client and was extremely sensitive to their requirements, resulting in a very relaxed but chic beachside home,” the judges said.

Mr McKenzie has owned and operated McKenzie Builders Ltd for about eight years, and credits his strong team for the company’s good reputation. He says the company has gone from strength to strength since his early days as a joiner. “You just have to work hard. In Canterbury word gets around fast so you have to be really committed to the product,” he says.

The company has worked on a variety of projects, including a horse stable with a rotating training pool. The revolutionary stable is the only one of its kind in New Zealand, and was an initiative McKenzie Builders Ltd really enjoyed constructing. “It was a very unique project but we love a bit of diversity — it was just another challenge for us.”

The company’s outlook for 2009 will focus on developing properties that are more eco-friendly and ensuring their processes are also environmentally friendly — something McKenzie Builders believes everyone in the industry should be thinking about. “We are looking at focusing on the way we work and making it more sustainable. It’s a new challenge but we would like to be much savvier with sustainability.”

Mr McKenzie says winning a national award in the House of the Year competition was very affirming for the company. “It’s a great way to get your brand out there and to show people that you’re good enough. People base their building decisions on reputation, so that really is the most important thing in this industry,” he says.