Home Apprenticeships Staying with a winner 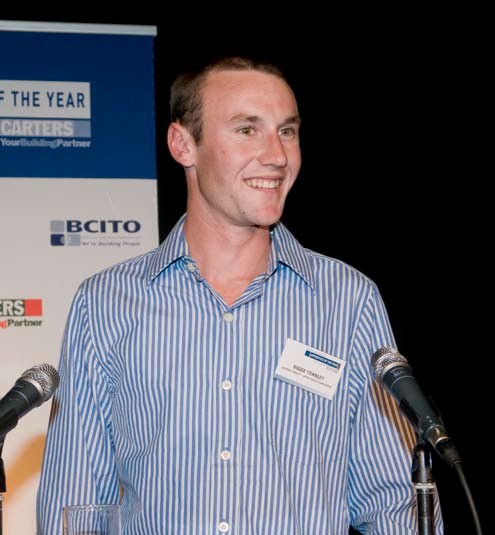 The 23-year-old was awarded third place in the national Registered Master Builders Carters 2008 Apprentice of the Year competition in October. Roger and winning Apprentice of the Year Joe Dobson, along with runner-up Shane Swan, were presented with their awards at a ceremony in Wellington. Roger, who was brought up on a farm, discovered his love of building things from an early age, and says building was the clear choice for him after finishing secondary school.

“It’s a great career choice, especially if you are someone who enjoys variety,” Roger says. He approached Ken Anderson of Ken Anderson Building Ltd in the hope of obtaining an apprenticeship, and is still working for the Blenheim building company today. “We get on really well — I don’t work with him on a day-to-day basis any more but I’m definitely glad I approached Ken.”

Roger, who also entered in 2007, took out the 2008 Apprentice of the Year for the Nelson/Marlborough region, securing his spot as a national finalist. Roger says his BCITO training advisor was “on his case to enter”, but he was also swayed by the prizes on offer. “A study grant is a fantastic prize — every little bit helps, and I’m really looking forward to the Outward Bound trip as well.” ‘A lot of fun’

Making it through to the national competition was a real highlight for Roger who found his time in Wellington — which included attending the national awards ceremony and a trip to a BRANZ testing facility — well organised and “a lot of fun”.

Happy to have regional and national success in the Apprentice of the Year under his belt, Roger’s only criticism about the competition is that not enough people enter.  “I think there were a lot of eligible apprentices last year who just didn’t give it a shot. I would definitely say ‘do it’ — you might surprise yourself. Great to receive feedback

“The interview with the judges is fine, and if nothing else it is great to receive feedback on how you are tracking.” Looking forward, he aims to stay with Ken Anderson Building Ltd but to start purchasing more of his own tools with a view to starting his own company in a few years. But for now he is content with staying put and working hard.

“Right now I am just completing a job I have been in charge of from the beginning. It has been a very technical job, and it has been my responsibility to manage subbies and ensure everything is ticking over. “Finishing this property and handing it over to our clients will be very satisfying.”