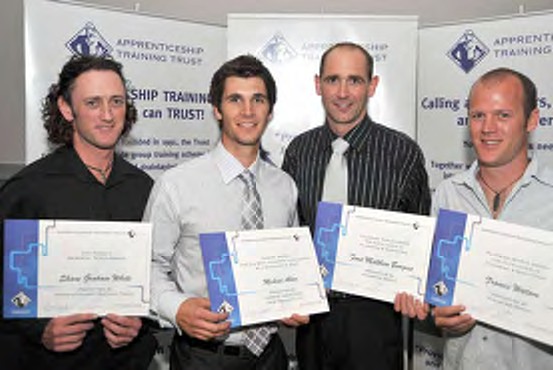 The plumbing, drainage and gasfitting industry has staged its largest-ever celebration of industry awards with a record number of graduating apprentices. The Apprenticeship Training Trust hosted more than 250 apprentices, employers, trade suppliers, parents and family members at a formal dinner in Auckland recently.

The industry’s top award, the Caroma Award for the Best Academic Achievement by a Graduate, was won by Michael Allan, who works for Cooke Plumbing Company Ltd, Auckland. He won an all-expenses-paid trip to Australia to tour manufacturing operations and suppliers.

A scholarship in memory of former Trustee Don Keenan was awarded to Shane White of Lyon Plumbing. He will attend a three-week Outward Bound course at Anakiwa in Queen Charlotte Sound.

The Auckland function is the first of two to celebrate the graduation of 68 Trust apprentices last year, the largest number in the Trust’s 18-year history, and taking to almost 700 the number who have graduated through the Trust over the past 14 years.

A second function will be held in Christchurch on 17 April to recognise the first 13 Trust graduates from the South Island to complete their training at Christchurch Polytechnic Institute of Technology since CPIT recommenced training for the industry in 2006.

Three new awards specifically for South Island apprentices will also be presented. The Trust is the industry’s largest apprentice employer, with apprentices training at four polytechnics. The most recent addition is Manukau Institute of Technology in South Auckland.