Home Latest News Everything to gain and nothing to lose 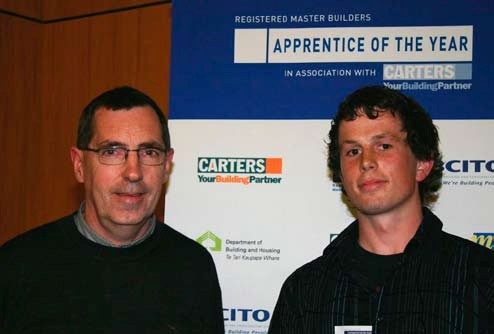 Peter Robson knows apprentices. The owner and general manager of Wood Robson Ltd says he’s had more than 50 join his team over the years. But Mathew Ball was the first to enter the Registered Master Builders Carters Apprentice of the Year, and the first to win locally and compete in the 2008 national competition.

Peter was introduced to Matt in 2004 when he approached Wood and Robson Ltd hoping for work experience. Mathew, who was finishing his secondary school education at the time, was also under way with his first Building Construction Industry Training Organisation (BCITO) modules, and displayed enough potential for Peter to offer him an apprenticeship at the end of the year.

Peter says one of the great things about having Matt on his team was the quality of work he was quickly able to produce. “There is only a short amount of time when these guys don’t produce a great deal. Within a year they are really valuable to the team, and at three to four years they are almost close to being full tradesmen.”

The current industry intelligence apprentices can bring to a business is another reason Peter believes apprentices are a valuable part of a building company. “Given the opportunity, apprentices can actually upskill existing team members. New guys coming into the industry are learning the current technical requirements for new and existing products.

“This information is top-of-mind to them which means they pick up on things that other builders who have been working for some time may miss or not be aware of.” Mathew, 22, entered the 2008 Apprentice of the Year to see how his skills compared to those of his peers, something Peter thinks is both commendable and courageous. “Just entering the competition says a lot about you. It says you are brave enough to be judged and that you are striving to be great,” he says.

Entering the Apprentice of the Year is a challenge Mr Robson highly recommends to all apprentices, following Mathew’s experience. “The whole process was an incredibly rewarding experience for us and him. Matt was clearly rapt to take out the local title, and told us judging had been straightforward and not at all daunting,” Peter says.

From our perspective we noticed a huge change in Mathew. There was clearly a lot of personal growth and a distinct change in how he approached his work.” Mathew’s development over his time with Wood and Robson is something Peter is extremely proud of, and confirms why he continues to introduce young builders to his team. “You only reap what you sow, and I’m really passionate about upskilling the workforce as a whole. Further to that, with apprentices, you train them from the very beginning, which means your company’s methods and culture is first nature to them.

“Lastly there is no doubt it is rewarding — clearly it has been for me!”

Entries for the 2009 Apprentice of the Year are open until 31 July. For further information, or to download an entry form go to www.masterbuilder.org.nz,www.bcito.org.nz or www.carters.co.nz.

Entry forms can also be collected from Carters stores nationwide.