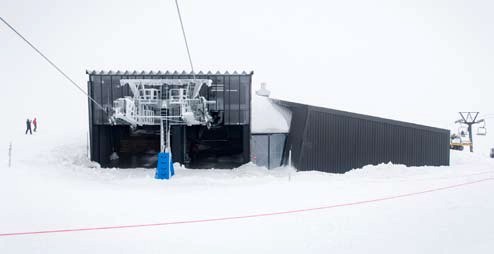 The unusual job of building two ski lift terminals 2322m above sea level was a highlight of 2008 for Stanley Construction. Not only was the project a great success for the client, it was also national winner of the Pacific Steel Industrial and Utility Project in the RMB 2008 Commercial Project Awards, in association with PlaceMakers.

Stanley Construction construction manager Craig Davison says while they had previously done a range of work for the client, Ruapehu Alpine Lifts Ltd (RAL), this was a project that provided some exciting challenges.

“We were really keen on this particular job because we could see its potential as a flagship project for the company,” Mr Davison says. “We knew it would demonstrate our specialist skills in tackling challenging and remote construction jobs.”

The project involved constructing two terminals, to be used for the loading and unloading of the new six-place chairlift on the Turoa ski field, located on the southern side of Mt Ruapehu. The terminals, situated at 1950m and 2322m, had to be able to withhold the extreme climate of the mountain, with gale-force winds and temperatures of well below freezing during the winter months.

This meant the Stanley Construction team was not only challenged with ensuring the strength of the buildings, but also by the remote location of the project and its harsh climate. “There were so many extreme demands faced by the team. Nailing the logistics around inserting the main panels on both structures was incredibly difficult,” Mr Davison says. “We used a Russian Mill helicopter, at a cost of $7800 an hour, and with the wind and cloud at altitude, ensuring it was steady enough to install the panels was a difficult and, potentially, very costly exercise.”

The unique location also meant health and safety was of paramount concern. “We had daily meetings attended by the client, our team and our contractors. We even had a stock of essential supplies on site with us at all times in case the weather really deteriorated and we had to stay put until we could be reached by a rescue team,” Mr Davison says.

Mr Davison has been working for Stanley Construction since he started his building apprenticeship with the company 23 years ago. Rising up through the ranks, he has been a project manager and is now a shareholder in the business.

He says the current economic climate is one of the biggest challenges he’s faced in his career to date. “While I can remember a couple of downturns it’s hard to think of a time when it was this extensive. We are restructuring and finding new ways of cutting costs to make sure we get through this time, but I think our point of difference — that we are experts at challenging, unique commercial projects — is a big drawcard for us,” Mr Davison says.

“We also focus on adding value — for all clients and for any type of project we do.”

Stanley Construction has entered the RMB Commercial Project Awards again this year, and Mr Davison says the company definitely considers the competition worth entering. “With the company motto being ‘gold for a reason’, we are really compelled to enter! But it is pretty cool to see your work on the big screen in front of all your peers and the client. It’s a satisfying end to a lot of hard work and effort by your team.”