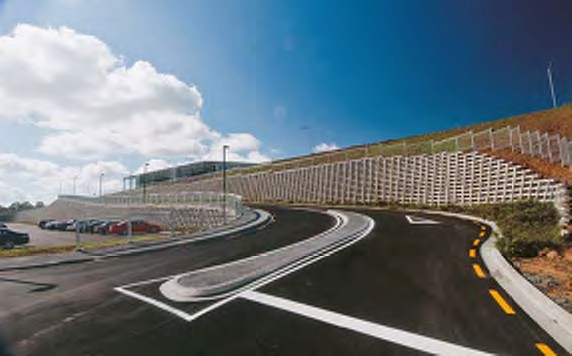 The recently completed concrete crib walls at Highbrook Business Park in Auckland are some the largest gravity walls of their kind built in the country in recent years. Designed, manufactured and built by Gibbons Crib Walls, the two retaining walls run more than 390 metres in length and in places are more than eight metres high.

That’s no mean feat, made even more impressive by the fact that the walls had to be completed to a tight programme. This speed of erection was one of the key reasons why Gibbons Crib Walls were chosen for the project. The owners of the business park, Highbrook Development Ltd, had a critical path that required the careful balancing of infrastructure and construction.

“We built the lower, larger wall first,” managing director Ron Williams says. “That allowed Hurlstone Earthmoving — the main siteworks contractor for the business park — to put in the drainage, roading and car parking which allowed Highbrook Development to get under way with construction of the Ford Building while we built a second, smaller retaining wall above the access road.”

With all the links of the chain so dependent on each other, managing resources well and adherence to the programme was essential. “We had two or three crews on site at any one time, and we stockpiled materials when we needed to,” Mr Williams says. “While one crew focused on the footings, another worked on the wall build and the third took care of the back-filling.”

The scale of the project required a double shift at Gibbon’s Albany factory to produce the 24,000 concrete blocks required for the job. The walls, which were started in late May 2008, were completed in October of that year. “Weather doesn’t concern us too much once we are out of the ground,” Mr Williams explains. “Once the foundations are completed our guys will work in all but the worst conditions to get the job done.”

The walls are a combination of single-depth, double-depth and triple-depth concrete reinforced block with GAP 65 infill, with the depth of the blocks depending on the soil conditions, height and surcharge requirements for that particular section of the wall.

“It was a big job and we worked closely with Hurlstone and the engineering consultants, GHD. The design, which was done by our engineering consultant, Brian Wilson, went through a stringent peer review process, particularly in relation to earthquake requirements that have become increasingly demanding over recent years,” Mr Williams says.

Cost-effectiveness was also a key consideration in choosing Gibbons Crib Walls. The speed and efficiency of erecting the walls, combined with the cost of the concrete crib blocks, resulted in savings of almost 20% to 30% when compared to other retaining options that were considered.

Of course, looks were important too. “Highbrook Development wanted a clean, structural look,” Mr Williams says. “They had used crib walls in other areas around Highbrook so wanted to keep a consistent visual effect.”

Highbrook Development Ltd was delighted with the outcome — the fast turnaround, the cost and the final visual result. “It really is a feature wall,” Mr Williams says. “Our team, from Brian Wilson at design stage to Tony Reed and our guys on site building the walls, can be proud of what they achieved.”