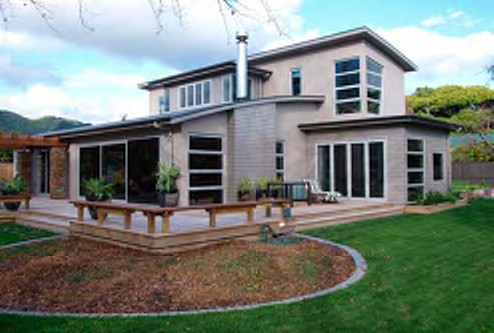 A stunning Waikanae property was a noteworthy development for S & J MacKay Builders, especially after it took out the New Homes $450,000 – $650,000 category in the Registered Master Builders 2008 House of the Year, in association with PlaceMakers.

Owner and operator of S & J MacKay Builders, Steve MacKay, says winning the award was a great surprise. “There was some really tough competition so being a small firm we were rapt to be up there with the best. The most important thing to remember is that you can’t win an award like this on your own — it’s always a team effort,” Mr MacKay says.

S & J MacKay Builders were approached by the owners to build the award-winning property, a recommendation Mr MacKay says came from the project’s architect. “When an architect or client recommends your company for a project, that’s the best compliment you and your team could receive. We always aim to build the level of quality we would want in our own homes.”

The design brief for the Waikanae property called for a completely new house, a final result that not only impressed the owners but also pleased the competition’s judges. “This is a home that has covered all the fundamentals and gone one step further to include sustainable elements. It’s great to see that every detail has been executed to a high standard,” competition judge Guy Evans says.

Mr MacKay started his building career as an apprentice with Fletcher Construction, a move he says provided him with a good introduction to the industry. “Building on commercial sites meant I was able to specialise in foundations and concrete finishing. It was quite difficult transitioning from commercial buildings to residential homes, but it definitely enabled me to develop a variety of skills,” he says.

S & J MacKay Builders has had a number of successes in the House of the Year competition since entering its first property in 2004. “We have entered the House of the Year competition three times since the company opened, winning three gold awards and a national award in 2008. We haven’t entered this year but for the 20th year celebrations in 2010 I’m sure we will pull something together,” he says.

Mr MacKay has worked with some of his team members for more than 20 years, and believes his company’s success largely comes down to strong relationships. “It’s important to have a good rapport with your clients and team members. If everyone works well together you tend to get a much better result,” he says.

S & J MacKay Builders’ business goals for 2009 are to focus on maintaining a high standard of quality and attracting new clients. “Price is often a determinant in the current market, but we are optimistic about the next year. Our philosophy is to keep our head above water and do the best we can.”