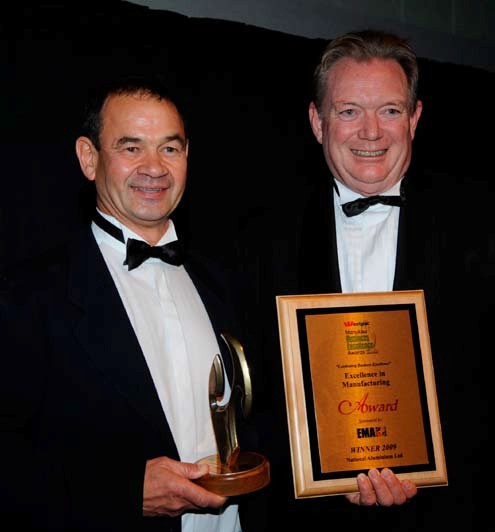 Awards a pleasing reward for a decade of hard work

Headquartered in East Tamaki, NALCO is active in a number of industries, notably the industrial marine, transport and building markets.

In the latter it serves the window and door segment through the Bradnam’s and Nulook ranges.

The awards are a pleasing reward for almost a decade of very hard work, according to managing director Ron Holden.

NALCO was established in 2002, a joint venture between Holden, Capral Aluminium NZ and Bradnam’s Windows and Doors (Australia).


Company has ‘come of age’

“This is our first entry into any kind of competition,” Mr Holden says. “We wanted to be able to put hand on heart and say, ‘we’re satisfied we offer the market complete security of quality supply.’ We’ve come of age, particularly in the past two years.”

However, NALCO’s roots go back much further than 2002. Mr Holden entered the door and window industry in 1968. In time, he worked his way up in the window and door system supply business that employed him, also gaining comprehensive design experience in the process.

In 1987 he shifted from Timaru to Auckland and set up an extension of the business there, growing it from nothing to a company with 70 employees. In 1997, after 29 years with the company, he decided it was time to take a break, and sold up his shareholding.

This gave him the opportunity he had always wanted to pursue — researching and designing a new window and door system that would offer the market improved weathertightness integrity.

Three years of work later the result was the Bradnam’s residential window and door suite range, sporting few screw penetrations to the frame and a novel system to connect frames and transoms.

Mr Holden’s visionary foresight was confirmed when the 2002 Hunn Report on leaky buildings identified a much greater need for moisture management systems in New Zealand buildings, including the interface between joinery and the building.

The report also stated the Building Industry Authority, now the Department of Building and Housing, needed to review the current practises for product appraisal. “The timing was good, the market was ready for it,” he says.

In 2002, Mr Holden started looking for a platform from which to launch the new range. By that time he had already teamed up with Bill Bradnam from Bradnam’s Windows and Doors (Australia), a large manufacturer in business since the 1970s.

“Both Bradnam’s and Capral were at a logical point where they were looking for innovation to enter a new growth cycle.

“For Bill and me the big opportunity with Capral was getting into business with a company that had a strong foundation, including the 40-year-old market leader Nulook windows and doors, an extruding operation in Hamilton, and a good industrial distribution network.”


The NALCO team never looked back. Mr Holden ascribes NALCO’s success to a first rate team that focuses on the customer, as well as the breadth and depth of its business.

“Our philosophy is to provide complete, practical aluminium solutions tailored to specific client needs. Our vertical integration gives us complete control over our product. We receive aluminium logs from New Zealand Aluminium Smelters at Tiwai Point, make them into billets and extrude these into shapes. All our extruded products are 100% New Zealand made.

“In recent years we’ve moved from being a low-cost operator offering the basics in our windows business — with an estimated 12% market share — to an innovative product developer with strong systems support and a growing share of the market, now estimated at around 19%,” he says.

The innovations were also successfully rolled out to the Nulook product range, with NALCO benefiting from the resultant reduced inventories, improved mill manufacturing efficiency, and increased Nulook sales.

But the innovations Mr Holden implemented did not stop at product design. They also carried through into manufacturing, tooling and window costing systems.

“Lean manufacturing is about having no waste, about becoming more slick and organised in terms of just in time delivery,” Mr Holden explains.

Another distinguishing factor is that NALCO runs an in-house training academy. “Our industry is full of bespoke products. When we manufacture these products, we have to be good to get it right the first time around.

“This drove the setting up of this academy, so that we give our employees the best possible chance to do so. It’s been a very successful approach for us,” he says.

Going to great trouble to build a team that excels at what it does, the company tries to keep these workers. A key focus in this respect is celebrating success, and the awards earned the NALCO team a company-wide holiday.

“We had to put our money where our mouth is. But we were very pleased, and each team member thoroughly deserved their day off.”