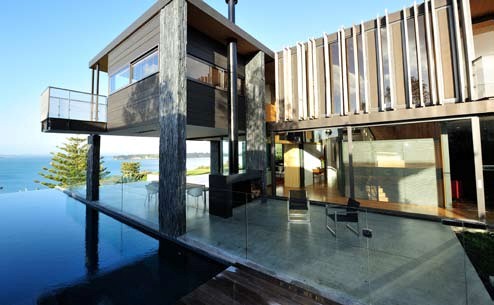 Philip Leach of PSL Construction says building big architecturally-designed homes has always been his plan. After taking out the PlaceMakers Supreme Award at the Registered Master Builders 2009 House of the Year for a new home valued at more than $1 million, it looks like his vision has been realised.

Mr Leach, owner of Auckland-based PSL Construction, says his team was excited when they landed the construction job for a three-storey, open plan family home in Glendowie designed by Pete Bossley Architects. “We were really happy to have secured a project of this nature — something that would really keep us on our toes,” Mr Leach says.

The property, which boasts views across Karaka Bay out to Browns Island and around to Musick Point, garnered a glowing review from members of the national judging panel who said it was “exceptionally designed and crafted”, and added that “the degree of difficulty and detailing required of the builders was a real test of their skills”.

Mr Leach admitted the build did have a high degree of difficulty, which provided some real challenges for his team. “The cedar baton wall inside certainly took a bit of thinking, and required a couple of trials before we felt confident enough to construct it,” he says. “And because it was such a big build, another major challenge was protecting the finished elements within the house and making sure nothing was missed out.”

One aspect the team particularly enjoyed was the variety of construction techniques required to create the finished home. “There was a great deal of masonry, steel, concrete and timber framing work involved, which made the construction of the property very interesting.” PSL had an average of eight builders on site at any one time during the project, and this swelled to more than 25 when subcontractors were called in. The home took just under two years to complete.

Mr Leach says building has always been the “obvious” career choice for him, even when he was young. He started a carpentry apprenticeship in 1987 and, after working for a building company for seven years and a stint of labour-only work, he “nervously” went out on his own in 1996. Since then, PSL Construction has gone from strength to strength, and winning the top award at last year’s House of the Year was a real highlight.

“Winning the award showed we are a company that can think outside the square and still achieve great results,” he says. “The effect the win has had on our company’s reputation has been subtle but lasting. “There is a real feeling that the industry and our target market know what we are about now.”

PSL could well be taking another shot at the top spot in 2010. “We’ve got another special build we might enter this year so here’s hoping we can prove our worth again!”