Home Apprenticeships Employers, get set to enter your apprentices 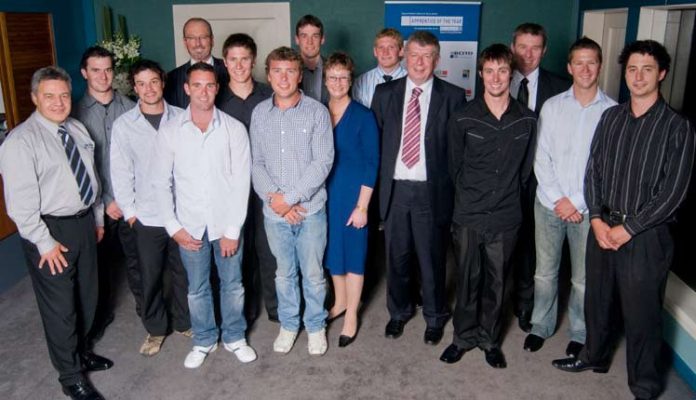 Carpentry apprentices across the country are vying for the coveted title of Registered Master Builders 2010 Apprentice of the Year, in association with Carters. Entries have just opened for the competition, which is held in 10 regions throughout the country before the national final in Wellington in October.

In addition to regional and national titles, there is more than $100,000 in prizes up for grabs. Backed by principal sponsor Carters, the Registered Master Builders Federation (RMBF), the Building and Construction Industry Training Organisation (BCITO) and supporting sponsor the Department of Building and Housing (DBH), Apprentice of the Year recognises the incredible talent, skill and drive of carpentry apprentices. RMBF chief executive Warwick Quinn says the momentum of the Apprentice of the Year competition grows each year, highlighting the construction sector as a great place to train and work.

“These awards provide a huge source of pride and motivation for apprentices within the building trade,” Mr Quinn says. “Employers are encouraged to support applications to this year’s competition for the many benefits they provide to their businesses and to entrants.” The competition, which is in its seventh year, has a new element for the 10 regional winners who qualify for the national final. This year they will undergo a practical test, in addition to being interviewed by the judges.

Carter Holt Harvey chief executive officer of Carters Building Supplies Group, Michael Falconer, says the changes will continue to enhance the standard of the competition and put the spotlight on carpentry skills that apprentices have mastered. “The Apprentice of the Year is the industry’s talent benchmark for New Zealand’s next generation of builders, and Carters is proud to support a competition that celebrates the future leaders of the industry,” Mr Falconer says.

Last year’s national winner, Nathan Biggs of Mackersey Construction in Hawke’s Bay, says his career “has really taken off” since he took out the title. “After winning Apprentice of the Year I’ve been flooded with opportunities. It’s a great way to get up the ladder and to make your mark, while earning the respect of your work mates, bosses and the industry,” Nathan says.

Entries for Apprentice of the Year are open until 30 June 2010. For further information, or to download an entry form, go to www.masterbuilder.org.nz. Entries can also be collected from Carters stores nationwide.

Apprentices can also check out the RMB Carters Apprentice of the Year Facebook page at www.facebook.com.