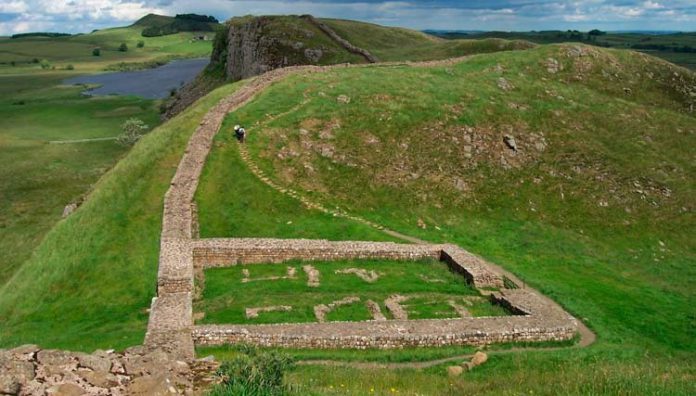 The recent celebrations marking the 20th anniversary of the fall of the Berlin Wall recall that using physical barriers to mark political borders ain’t new. Berlin’s infamous structure wasn’t the first and it sure won’t be the last, as the Israel-Palestinian wall testifies today.

Back in the second century AD, the Roman emperor Hadrian decided to build a wall of his own. He needed to draw a line in the sand, or more correctly across England, giving a blunt message to those crazy barbarians to the north: Trespassers Will Be Persecuted.
A visit to Britain in 122 AD had convinced Hadrian of the need for a physical boundary. It was not just the Caledonians who were proving difficult. As in other of Rome’s far-flung provinces, the British locals were revolting.

If nothing else, an impressive wall would provide a symbol of Roman power.
Roman emperors had already used a predecessor of the Berlin Wall in their north-east provinces to keep the Goths and Germans out.In Britain, Hadrian felt a more substantial linear fortification was needed running from Wallsend on the River Tyne to the shore of the Solway Firth — a distance of 80 Roman miles or 117km.

Construction started in the east immediately following the emperor’s visit, and took six years. The initial plan required a wall plus a ditch, along with 80 small gated forts placed more or less every Roman mile as the lie of the land permitted. Each of these would hold a few dozen troops and serve as observation and signalling posts. The builders used whatever construction materials were locally available. Much of the wall is built of squared limestone, and is some 3m wide and 5 to 6m high: the so-called Broad Wall.The central section is just 2.4m wide, or even just 1.8m, but sitting on a 3m base: the Narrow Wall. Where stone was unavailable, turf was used, giving a mound 6m wide and 3.5m high.

The Broad Wall was initially built of mortared and dressed facing stones about a clay-bonded rubble core. However, it proved prone to collapse, and whole sections were replaced using a mortared core.  Three legions were involved with construction that was divided into 8km lengths. One group of each legion would excavate the foundations and build the milecastles and turrets. Other cohorts would follow, linking the forts with the wall itself.

Within a few years it was decided to add over a dozen full-sized forts, each holding from 500 to 1000 auxiliary troops. After these forts were in place, a large flat-bottomed ditch, called the vallum, was built on the southern side of the wall, some 6m wide and 3m deep, and bounded on each side by a 10m wide berm. Beyond the berms earth banks were built up 6m wide and 2m high that provided routes along the wall.

Eventually, the wall formed part of a comprehensive defensive system that, from north to south, consisted of: • a deep ditch and glacis, • a berm with rows of pits holding entanglements,  • the wall itself, • later, a military road, and • a mound, a ditch and further mound to discourage or slow down any raids.

The total number of soldiers manning the early wall probably exceeded 10,000, with serious attacks occurring in 180 AD and between 196 AD and 197 AD. Following Hadrian’s death in 138 AD, Emperor Antoninus Pius abandoned the wall and began building a new turf-based wall to the north, the Antonine Wall. When Marcus Aurelius took over as emperor he abandoned the Antonine Wall and reoccupied Hadrian’s Wall.It continued to be manned by Roman troops until their final withdrawal from Britain in 410 AD.

The wall then fell into ruin. Over the centuries, a large proportion of its stones were recycled in local buildings. Much of what remains owes its preservation to John Clayton, a lawyer who became town clerk of Newcastle in the 1830s. Among other things, he began systematically purchasing land around the wall and excavating some of the ruined milecastles. Eventually the National Trust took over, giving us the striking monument to the transient nature of political power that we have today.