Home Latest News Eyeing you up 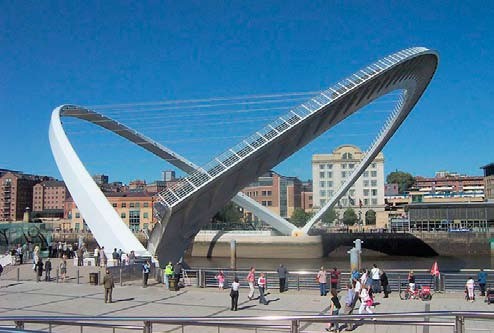 They do things differently in England’s north. Up in Newcastle-on-Tyne they have a plethora of bridges crossing the river on which the city is built. None, however, were dedicated to cyclists and pedestrians.

When plans were under way to regenerate Gateshead Quay, the council decided to build a foot+cycle bridge that would connect the new venues and public areas under construction. Like the Auckland City Council and its infamous World Cup Party Central, the Gateshead Council hosted a competition. However, in the UK they got it right. When they invited architectures and engineers to submit designs they laid down quite specific criteria.

Among other matters these included: • clearance for the ships on the River Tyne, • no overshadowing of the views of existing bridges, and • no obstruction of the quayside.

They received 150 submissions from which they selected a shortlist of finalists. The residents of Gateshead were then asked to vote for their favourite design. The winner, announced in February 1997, was the Tilting Bridge design of Wilkinson & Eyre Architects and Gifford & Partners.

The bridge sections were fabricated at Watson Steel, Bolton, and transported section by section to the AMEC works in Wallsend, Newcastle. AMEC welded all the sections together and coated them with a weather-resistant paint. In 2000, the completed bridge was transported as a single unit six miles up the river to its final position where it was raised in place on 20 November by Europe’s largest floating crane, the Asian Hercules II.

It was opened to the public on 17 September 2001, and formally dedicated by Queen Elizabeth II on 7 May 2002. It quickly became known as The Winking or Blinking Eye, and is now a significant tourist attraction in its own right. To operate, the bridge simply clears pedestrians and bikes from the walkway which then pivots so as to tilt, along with the span.

The bridge won Wilkinson & Eyre the 2002 Royal Institute of British Architects Stirling Prize, and won Gifford & Partners the 2003 IStructE Supreme Award. In winning the Stirling Prize, Wilkinson & Eyre became the first, and so far the only firm of architects, to retain British architecture’s most prestigious prize, having won it in 2001 with the design for the Magna Science Adventure Centre.