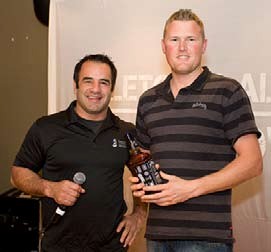 The word recession has had a different meaning to the team at Fletcher Aluminium. While many other businesses saw doom and gloom, Fletcher Aluminium saw an opportunity to work harder and smarter in the pursuit of innovation and performance.

With building requirements becoming more stringent, and insulation and thermal performance becoming hot topics, Fletcher Aluminium focused on addressing these changes. The company did so by upgrading its standard residential platform to be more robust, with the ability to carry more weight brought on by new double glazing expectations. Aesthetic style

It also created a new 40mm Architectural Platform which has greater performance as well as square-edge aesthetic style. And, quite literally, hot off the (extrusion) press, Fletcher Aluminium has launched a 52mm thermally broken suite.

After its tireless effort to ensure the company remained at the forefront of the industry, it embarked on a Builders Roadshow in conjunction with its window and door brands — Fisher, Nebulite, Rylock and Vistalite — to 25 centres nationwide. League legend on board

The company also brought on rugby league legend Stacey Jones as its ambassador, as he epitomises similar values — striving to be the best, and performance at the highest level. Now with 18 roadshows under his belt, he knows more about windows and doors than most, and he can speak first hand about his own home which he is building with windows and doors from the Pacific Suite.

To find out more about the new suites, visit www.pacificsuite.co.nz orwww.atlanticsuite.co.nz.