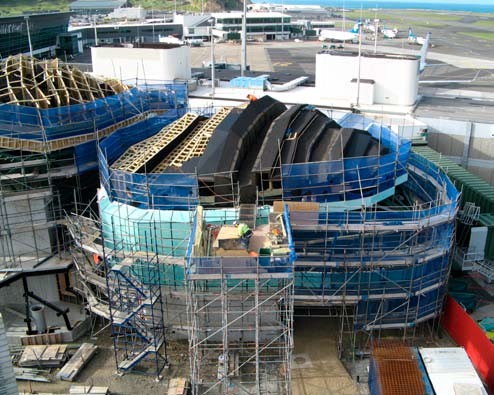 “Our radical departure from traditional airport design worldwide is entirely deliberate,” Wellington Airport chief executive Steven Fitzgerald says. “What is set to become New Zealand’s newest iconic building, ‘The Rock’ combines functionality and capacity with what will be a memorable visitor experience.”

What remained after the completion of Stage One of the airport upgrade was a mere 1000 sq m pocket of a site, defined by the existing buildings and a fuel compound to the north. What was required in the brief to architects Studio Pacific and Warren and Mahoney, who teamed up to respond, was a design that would be unapologetically “edgy”.

Marcellus Lilley (Studio) and Rodney Sampson (WAM) talk about their daring, even provocative, concept: “We took our inspiration from Wellington’s wild south coast. From a photographic study of the geomorphology, we extrapolated features and scale, the fissures and raking geometry, into the design development of the building form. “In marked contrast to the blandness that typifies most international airports with their mall-like interiors, we wanted a geological theme with a rugged personality, yet one which would at the same time be a haven of warmth and calmness, with carefully crafted views from safe vantage points.”

In fact, The Rock is comprised of three parts: the Nose, which is nearest to the runway; the Main Rock, which is closest to the existing terminal; and the Ramp, which is adjacent to the Main Rock. From the Nose, passengers have a spectacular view of aircraft docking at the aerobridges, seen as if from inside a giant boulder. In the Main Rock, there is ample seating for travellers to rest, quiet space on the mezzanine floor and a play area for children, while the Ramp serves as a conduit for arriving and departing passengers.

Structural engineer Peter Holden of Beca comments on some of the challenging geometry presented by The Rock: “The ground floor and first floor are concrete, which supports portal frames. These have varying geometry and shape to create the form. No two portal frames are the same, and there is a wide range of steel sizes and connection types. “The Rock was one of the first buildings in New Zealand that Beca modelled three-dimensionally using Revit software, which enables us to produce structural drawings from a 3-D model. “However, because of the irregular shape of the building, it was impossible at the design stage to foresee all of the clashes that could occur between the steelwork, timberwork and services.

“This is where the steel contractor, Stevensons, helped resolve matters by allowing its detailed 3-D model to be imported and merged with the drawings of the follow-on trades. By successfully conducting clash checks, Stevensons ensured that potential problems were identified and either rectified or eliminated even before fabrication. “The unique shape also meant that generic details developed during the design phase could not be used in all situations, necessitating a high degree of specific design. For example, no fewer than four support options were required for the triangulated ceiling panels to node correctly.

“In addition to the construction of the new building, modifications were made to the existing terminal. In some cases, the steelwork details weren’t known until sections of the existing terminal were broken out. “Meanwhile, there was also the challenge of ensuring seismic interaction between the Rock structures and the existing terminal, with different shapes and stiffnesses coming into play. But I have to say it’s been a great experience to work on what will surely be one of Wellington’s landmark buildings.”

That certainly was the view shared by Stevensons Structural Engineering (1978) Ltd managing director Evan Kroll. “When we first looked at this project, we saw that it was unique and expected it to be problematical. As our steel detailers worked with the architects’ 3-D model to produce all the dimensions and angles in Pro-Steel, we began to realise that what seemed like an enigmatic design was going to turn out to be iconic. “This wasn’t a series of ho-hum portal frames but a complex, angular structure that asked a lot of us and made us work hard to solve the buildability challenges.”

The Stevensons team attributes at least 50% of its success to the strength of its drawing office and the leadership given by manager Peter van der Made. “Because we had superb co-operation from Beca (whose Revit model made things so much easier), from the main contractor, Mainzeal, and from the architects, we had clear understanding of what everyone wanted,” Mr van der Made says.

“We were also able to tap the practical experience of our detailers, who know what dimensions are required and where they should be shown. The shop drawings they provided to our fabricators led to excellent productivity.”

They had to, because of the need for accuracy in the workshop. Once the steel was delivered to the site, there would be no room for even minor adjustments. The site, after all, was a fully operational international airport: it had no room for error. “Check it twice! Check it again but do it once and get it right!” That’s the mantra of Stevensons production manager Troy O’Donoghue, who has been 13 years with the company. “Even before we despatched our first delivery, we conducted a test erection in our workshop to get our heads around how a section of the structure would go together on site. Once we felt comfortable, then it was a matter of stringent quality assurance.

“There were angles for Africa, and full-penetration welds of plate 40-50mm thick. Our top guns had to be at their best. And then there were the transport logistics. Because the steel members were not symmetrical, each truck load had to be specially configured. “That’s how we ensured the project ran smoothly. It starts with good drawings and is followed by accurate fabrication, planned transportation and speedy construction — with every member of the team staying alert to everybody’s safety.”

The biggest safety concern was the possibility that building debris might be left air-side, close enough to aircraft to pose a threat. “Mainzeal Property and Construction Ltd put a raft of processes in place to minimise every risk,” Wellington International Airport Ltd (WIAL) project manager Graeme Anderson says. “Mainzeal worked well with our airside staff to ensure there were no issues. In the countdown to the official opening, (date to be confirmed), various visitors to The Rock are clearly delighted by what one can only describe as the wow factor.

“WIAL is equally delighted that The Rock makes such an impact, as we believe that it expresses Wellington’s individuality. “Although only the final component of a two-phase upgrade to our international terminal, it doubles our international processing capacity while, at the same time, making the visitor experience memorable. “Word-of-mouth is powerful, and it will probably say we’re trend setting,” Mr Anderson says. Some key facts: • Expanded and redesigned departure lounge with seating for 660 • Double and laminated glazing • More than 1450 sq m of retail space