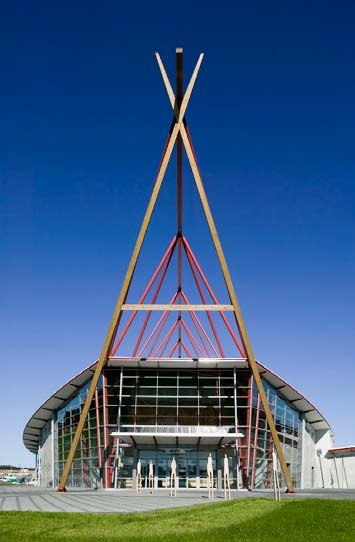 Back in April 2005, the Counties Manukau Pacific Trust unveiled its TelstraClear Pacific Events Centre. Remarkably, the building opened debt-free. Since its opening, it has proved to be a well utilised and much appreciated community asset, providing an object lesson for any New Zealand community needing a similar indoor public space.

The centre is located between SH1 and Great South Road in Manukau City. Primarily, it is an indoor multi-purpose venue that has successfully hosted exhibitions, trade shows, conferences, concerts, community events, banquets and indoor sports such as basketball. It is unique as a venue in that it successfully brings together art, culture, leisure and business. In particular, it is a living expression of Pacific arts and culture, especially dance, theatre and music.

The Counties Manukau Pacific Trust was formed in July 2000 when the need for a Manukau-based events centre had become apparent. From the beginning, Richard Jeffery was chief executive. He arrived with 19 years’ experience in venue management, hospitality and tourism. Previously, he had worked as Director of Theatre and Convention Services at The Edge.

The construction cost was $48.7 million, with less than half coming from Manukau City Council. Architects Cox Creative Spaces created two main spaces — the Sir Woolf Fisher Arena and the Genesis Energy Theatre. The arena has an end-theatre stage and a capacity of 3000 when terraced and flat floor seating are combined.

This seating can rise into the ceiling to open the area up for sports, an exhibition space, or a conference banquet hall. Within the arena complex are four changing rooms. The Genesis Energy Theatre has a capacity of 340. Its changeable seating provides for a traditional end stage format, or can be set up for banquet or convention table events. It, too, has four dressing rooms.

The prevailing theme of the centre since inception has been Coming Together As One. This theme is incorporated in aspects of the centre’s architecture. The entrance and plaza lie beside water, and represent the journey across the seas to Aoteoroa. The plaza serves as the arrival point prior to entering the centre for gatherings. And the centre itself combines traditional Maori and Polynesian approaches to building, but expressed in a contemporary manner. The exterior truss symbolises the waka, with the internal ceiling creating a lattice effect representing a net to embrace all who gather within.

The combination of theme, iconic architecture and functionality has seen TelstraClear Pacific score a number of awards since Day 1, including: