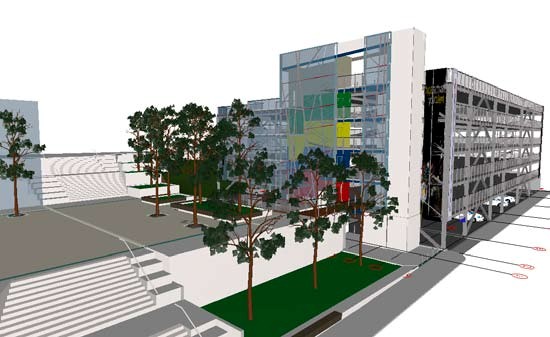 Mainzeal has begun construction of a five-and-a-half storey carpark at Wintec’s central city campus in Hamilton. The $5 million, 257-bay car park is being built along Nisbet Street, close to Wintec’s historic brick corner building. It will primarily service students and staff and some local commercial tenants, with public parking available after hours, on weekends and during school holidays.

The steel support frame will contain 200 tonnes of fabricated steel — equivalent to the weight of around 135 cars. The building is set for completion in early 2011. Mainzeal Waikato manager Finlay Irwin says his team is looking forward to leading this major project for Wintec. “Our local Mainzeal office has contracted to Wintec on several major projects, including the current renovations we’re doing to this building and construction of the new hub on their Avalon campus, which opened in March.”

Mr Flowers says the first step in construction involves excavating and removing soil from the Nisbet Street site. “Our team will begin the project by excavating 5000 cu m of dirt from the site, which is equivalent to the weight of approximately four million Huntly bricks. That’s around four thousand tonnes of dirt,” Mr Irwin says.

The Wintec car park will feature an architectural facade of random patterned glass, known in the building industry as “crazy glass”. The car park will include a link bridge to a newly-landscaped courtyard, which is part of the refurbishment Mainzeal is leading at Wintec’s historic building. Energy efficiency lighting is also a key feature of the new car park.

Additional facts include: • 750 cu m of reinforced concrete will form the car park foundation. That is equivalent to 81,000 20kg bags of concrete, or the weight of around 240 elephants. • Each of the precast concrete floors will measure 6400 sq m, just a few square metres smaller than a rugby field. • There will be more than one kilometre of protection barriers surrounding the site.