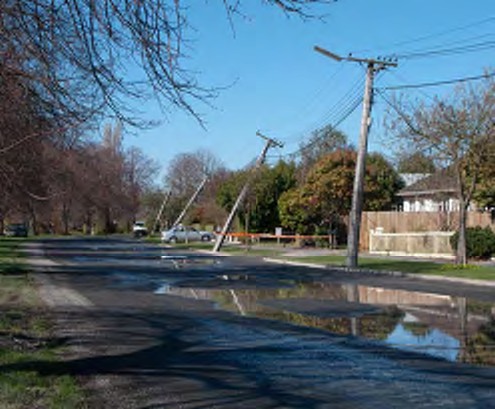 The long and expensive rebuilding process to repair the structural and other damage in and around Christchurch sustained in the September 4 earthquake is under way.
The 7.1 magnitude quake damaged farms, infrastructure and about 100,000 homes and 500 inner-city buildings, including several structures of historic and character value. A number were destroyed completely.

Experts estimate repair and clean-up costs may exceed $3 billion, and that at least 1400 licensed builders will be needed in Canterbury to do the work.
Director General of Agriculture Murray Sherwin will head Canterbury’s Earthquake Recovery Commission (ERC), established under the Canterbury Earthquake Response and Recovery Act 2010, passed by Parliament on September 14.

The ERC will provide advice to the Cabinet on prioritising resources and allocating funding, and act as a central contact point between central and local government in managing the response effort.
The Government reportedly expects to cover about 90% of the cost of repairing uninsured local infrastructure. It has earmarked an initial $94 million in the emergency works fund, including at least $5 million pledged to the mayoral fund to help families in need but not eligible for state assistance.

The Government has indicated it will help uninsured households, estimated to be around 5000, who experience true hardship. Up to $10 million will be available for the restoration of heritage and character buildings.

However, the Earthquake Commission (EQC) and private insurers will cover the bulk of the costs, with the EQC expected to cover a significant portion of the insured losses.
It will undertake this mammoth job with the help of a project management team. A one-stop shop for repairs between $10,000 and $100,000, the project management team will handle all aspects of repairs for householders.

This includes developing a needs-based priority system, dealing with the consent process, subcontracting and managing the contractors required to carry out the building design, construction, repair and quantity surveying involved, and providing quality assurance.
The EQC now has five field officers and 350 staff to facilitate claims processing.

Fletcher Construction and a consortium consisting of BECA, Arrow International and Opus International Consultants are on the EQC’s project management team shortlist, and the commission is now working through the details to finalise who will be appointed.

It was anticipated negotiations would be concluded around October 15, and that repairs would start as soon as possible after that.
Claims made to private insurers may cost $400 million to $1.4 billion, making this one of the most expensive earthquakes ever in New Zealand. Commercial insurers will handle claims exceeding $100,000 in accordance with their in-house policies.

Where will the 1400 builders come from? According to reports, a number of builders and subcontractors from across the country are already preparing for the rebuild.
But only building practitioners licensed under new rules, to be introduced nationwide in 2012, will be able to carry out minor earthquake repair work without a building consent.
Minister for Building and Construction Maurice Williamson says owners of damaged Canterbury homes and buildings should be able to choose licensed practitioners to work on their properties.

Large numbers of Canterbury builders, tradespeople and designers are now applying to become licensed building practitioners and, he says, the Government is pulling out all the stops to help them through the process.
In addition, local merchants and industry associations have stepped in to help run clinics with the Department of Building and Housing in and around Christchurch.
“It is great to see the industry working together this way. For owners, using licensed practitioners provides greater certainty that homes and buildings are designed and built right the first time,” Mr Williamson says.

What are the lessons to be learned from natural disasters such as this? Despite the earthquake’s large magnitude, a lot of buildings survived.
Strengthened masonry buildings in Christchurch generally withstood the quake well, while many unstrengthened buildings sustained extensive damage.
Yet people must not become complacent, University of Canterbury experts warn. They say this was not the predicted “big one”, and more work needs to be done to improve building codes to prevent greater damage in another earthquake.

Other specialists warn liquefaction was a major cause of damage sustained by many structures, and amended building rules might have to make liquefaction-proofing a requirement.
On the money side, some punters believe it is time to look at making EQC cover universal by collecting it along with rates, and make disaster income insurance universal through a tiny income levy, possibly 1% the size of ACC levies.

And energy management specialists say that developers who rebuild commercial premises now have the opportunity to erect sustainable, future-proof structures.