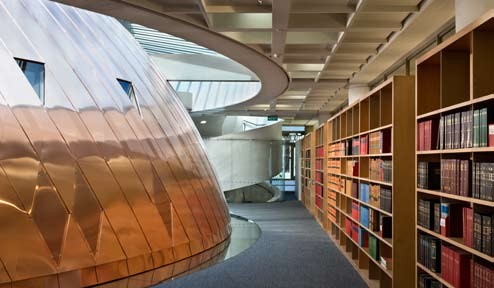 A visitors centre at Waitomo Caves has taken out three of the top prizes at the NZ Wood Timber Design Awards announced at a function at Te Papa in Wellington recently. Winning the Commercial Architecture and Commercial Engineering Excellence Awards, the centre also picked up a Clever Solutions award.

Designed and built by a consortium of Dunning Thornton Consultants, Architecture Workshop, Hunters and Hawkins Construction, the judges said the building was a “highly-engineered answer to functional needs, which has been achieved in a structure which is as much high-performance as it is delicate”. Another of the main prizes went to the new Supreme Court Building in Wellington, designed by Warren and Mahoney.

Winning the Interior Fit-out Award, the judges commended the “mesmerising interior, demonstrating the craft of modern digital technology, fabrication and biomimetic design”. Using silver beech, the courtroom’s panelling mimics the spiral diamond patterns of the native kauri cone. Another highly commended entry was the “Folding Whare”, a simple, collapsible one-room emergency shelter for use in disaster recovery, designed by Callum Dowie in his final year at Unitec’s architectural school.

This year’s People’s Choice Award — decided by popular on-line vote — was won by Ambienti Architects for their Papamoa-based sales pavilion and community centre. The Scott’s Landing beach residence by Stephenson and Turner Architects won the Residential Architectural Excellence Award for their design of a beach house at Mahurangi Harbour, north of Auckland.

The Ministry of Agriculture and Forestry’s multi-purpose building in Wallaceville, Wellington, also designed by Stephenson and Turner Architects, won the Sustainability Award for the architects’ “elegant but ambitious project to create a five green star rating using a refined architectural palette”. Birkenhead’s library and civic centre, designed by Archoffice, won the Cladding Building Envelope Award for its “sculptural timber facade”.